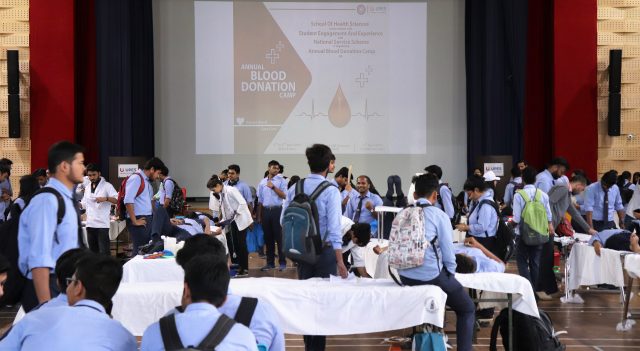 By OUR STAFF REPORTER
Dehradun, 8 Apr: The ‘12th Edition’ of the UPES ‘Annual Voluntary Blood Donation Camp’ was organised by its upcoming School of Health Sciences and National Service Scheme in association with ‘Department of Student Engagement & Experience’ from 1 to 4 April across its Kandoli and Bidholi campuses. The beneficiaries of this event this year, too, were the Blood Banks of ‘Indian Medical Association, Dehradun’ and ‘Shri Mahant Indresh Hospital, Dehradun’. The annual activity, being conducted at the UPES campus for over a decade now, witnessed a high turnout of 2131 students, staff and faculty volunteers of the University.
Arun Dhand, Sr Director – Public Affairs, UPES, disclosed that though the University recorded a high turnout of 2131 donors this year, the actual number of donated blood units count was 1634 numbers owing to 497 students being ‘deferred’ on account of their low hemoglobin or other medical reasons. He applauded the noble contributions made by the ‘UPES Family’ that would go a long way in saving human lives in the state. “The initial two days of the camp were held at the Bidholi campus comprising the ‘School of Engineering’, ‘School of Computer Sciences’ & ‘School of Design’ and shifted base to the Kandoli campus which houses the ‘School of Business’ & ‘School of Law’ for the remaining days,” he said.
Expressing deep gratitude to UPES for organising such camps year over year, the doctors and technicians of both the collecting agencies commended the all-out efforts made by the UPES Team of staff and students supporting the noble cause – Donating Blood. Thanking the self-motivated students and staff for managing the event efficiently on all the 4 days despite their packed routines, they were overwhelmed with the initiative and motivation levels of the students and staff.
The officials of ‘Shri Mahant Indresh Hospital, Dehradun’ Blood Bank shared that the 1008 Units of Blood collected by them in this camp were so far the highest ever collected from a single camp by them.
Thanking the students and staff, Rashmi Lal, Sr Manager, Student Engagement & Experience, made a special mention of the ‘first time donors’. Dr Neeraj Mahindroo, Dean – School of Health Sciences, UPES, declared, “I am happy that a large number of security, housekeeping and pantry staff too were among the donors who came forward to donate blood on their own. My thanks to the Chancellor and Vice Chancellor, UPES, as also students Rehan, Teja, Sarthak, Varunendra Dev Singh, Atendra Vikram Singh, Abhay Chauhan and their team members.”