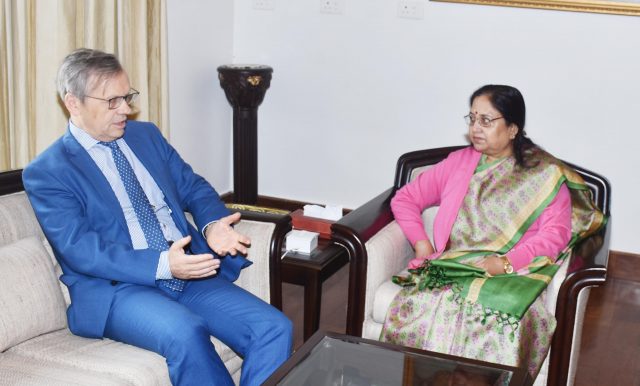 By OUR STAFF REPORTER
DEHRADUN, 6 Feb: Norwegian Ambassador Nils Ragnar Kamsvag paid a courtesy call on Governor Baby Rani Maurya on Wednesday at the Raj Bhawan, here. The Governor said that Norway was known to have expertise in aqua culture, power sector and green technology, globally. She said there were immense possibilities in Uttarakhand for fisheries, hydro power projects, solar energy and green technology sectors for Norwegian companies. The state was investor friendly. A single window system had been implemented for investors. Many policy based decisions had been taken to promote investment in Uttarakhand. She expressed the hope that the visit by the Ambassador would promote the bilateral relationship.
Ambassador Kamsvag stated that the trade relationship between India and Norway was strengthening. Earlier, Norwegian companies used to focus on Maharashtra and Gujarat but now they were interested in UP and Uttarakhand, too. Presently, around 140 Norwegian companies had expressed interest in investing in various states of India. Norway had particularly done good work in run of the river fisheries technology. With the help of Norwegian technology, good quality fish production using less water was possible. Norway had also developed high-end technology in hydro and solar energy. Norway had arrived at an agreement with Survey of India and IIT Roorkee on research work. More than 50 percent cars were emission free in Norway. The country was committed to making all of its vehicles emission free by 2025.