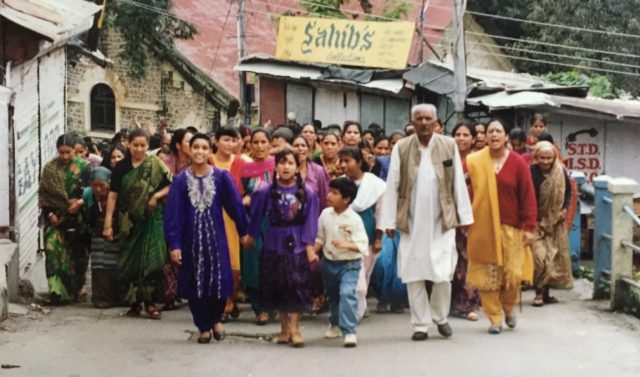 ‘ Arrey! Aagey mat jaa! Curfew laga hai’ (Oye! Don’t go ahead! There’s a curfew!) A well-meaning bystander yelled at the milkman headed to town. ‘Kafru? Kahan laga hai? Mainay dekhna hai!’ (Curfew? Where? I must see it!’) Answered the simpleton. ‘Kafru’ must be a new film. Or so he thought. 3 rd September 1994. It was the morning after the day before. Chunnu my friend, living in Holllow Oak, beyond Company Bagh, totally unaware of the Mussoorie Firing had set out on his morning stroll. All the shops were closed. But he convinced himself it must be Sunday. And he went past an unmanned barrier in Library Chowk, saying: ‘Traffic control’ Arrived at the Kutchery, he realized perhaps he had bitten off more than he could chew. Something was wrong. Maybe it was the trooper’s uniform. It was the wrong colour. Why were they wearing the camouflage blue of the Rapid Action Force? Quickly, thinking on his feet, before they noticed the stranger in their midst, he ducked into the office of the SDM Badri Prasad Jasola. That deft move secured two curfew passes: one for him and one for me. Armed with them, he cruised through the PAC barricades to arrive at our home to give me Pass No.2. Thank you Chunnu bhai! Without you this account would have been a blank page. Elsewhere, Winkie, a guest-house owner near Sylverton, climbed up the ramp to Picture Palace to be confronted by a troupe of aggressive policemen. ‘Where do you think you’re off to?’ asked one. ‘Out for a morning jog!’ ‘Chal ghar! (Go home!)’ Snapped the man, tapping menacingly the ground with a stick. ‘Why argue with a beady eyed gorilla?’ he remembers. ‘I went straight home only to step out two weeks later.’ After three days, with some semblance of normalcy in the air, the administration decided to relax the curfew for two hours. Walking around the Mall, shops reopened. Women, children and old men mopped up left-over provisions, to stock their larders. But something was amiss. The young men had gone missing. ‘Something’s brewing!’ One wondered. ‘Something is cooking!?’ I need not have worried. Most of them had headed straight for the Lavender Lane – a name that came from the all-pervading stench of urine and alcohol – a narrow alley Approaching Tehri City, Circa 1930spg The peaceful demonstration of 1994 Landour Bazaar that connects the Mall with Camel’s Back Road. There they were. Lined up in an orderly queue waiting their turn to quench the thirst of their curfew-slaked throats. Elsewhere in Uttarakhand, the grey heads struggled hard. The impasse had to be broken. The Sanyukt Sangharsh Samiti or the Joint Action Committee, called for a Mussoorie-Kooch or a March to Mussoorie. The plan was simple: storm the place, break the curfew, now into its second week. 15thof September 1994 witnessed all modes of transport: buses, motor-cycles, taxis, trucks, vans and vehicles of all descriptions setting off on the three approach roads to the hill station. Of these three, two posed no problem. Columns heading from Dehradun ground to a halt at Kothal Gate. Those from Barkot, Nainbagh and Purola were blocked at the barrier near Kempty. ‘Twas the third one barreling down Tehri Road that set alarm bells ringing as hundreds of protestors from afar as Kumaon, Pauri, Tehri and Uttarkashi broke the flimsy police barricade at Tehri; moved on to Chamba smashed another barrier to repeat the feat at Dhanolti. Turbo charged with more josh they got within four kilometers of striking distance. Dusk descended. The police let the crowd slip through Batagaat, straight into an ambush outside the school gate of Woodstock. To one side reared the rock face of Taffton; on the other yawned a deep ravine past Pallisades. There was no escape. A brutal lathi- charge smashed vehicles and shattered windscreens, letting loose a reign of terror. Later day historians struggle to give the incident a name. But defeat is, at best, a lonely orphan. You find it variously described as the Mussoorie Kooch, the Chamba March or the Batagaat Lathi- charge. As I write, in the rain washed gully, you find the odd chappal, a stray shoe or a tattered shawl. They remain the only reminders of that brutal day.