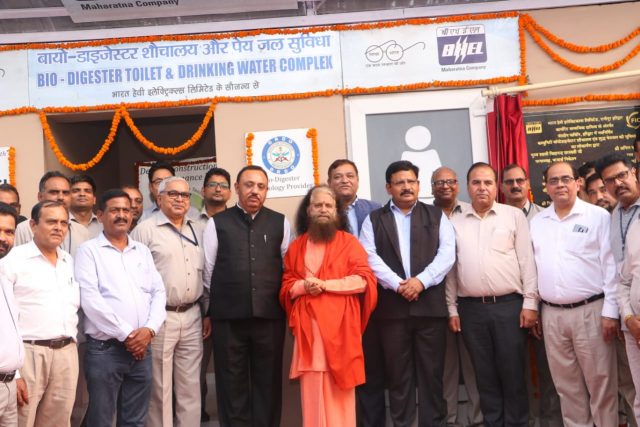 Haridwar, 1 Nov: Swami Chidanand Saraswati, Co-Founder of The Global Interfaith WASH Alliance, Founder, Ganga Action Parivar, and President of Parmarth Niketan, blessed the official inauguration ceremony of two new eco-friendly, public bio-digester toilet clusters just completed at Pantdweep Parking, here. He was welcomed by Anil Kapoor, Director (HR), BHEL, Deependra Kumar Chaudhary, District Magistrate, Sanjay Gulati, GM(I), BHEL, Haridwar, Nirankar Saxena, Dy Secretary General, FICCI and many others. This public toilet complex is one of 25 complexes that are to be inaugurated under a partnership programme between BHEL, FICCI, GIWA and GAP. Through CSR sponsorship, BHEL will provide funds for the construction and the first two years of O&M of 25 public locations along the Char Dham route and, within the state of Uttarakhand, in promotion of the Swachh Bharat Mission, India, and the National Mission for Clean Ganga. FICCI is facilitating the implementation and carrying the vision of the project forward on the ground. GIWA and GAP helped facilitate the process through obtaining NOC’s for many of the locations and continue to raise much needed awareness through advocacy and training to inspire and catalyse behaviour change, hence better utilisation of the infrastructure. Swami said, “Today, on the occasion of Chhat Puja, when women across much of Northern India are performing puja and archana in the sacred rivers and water bodies, let’s pledge and act to protect the natural resources that are the very focal point of these sacred traditions. Let us work to ensure that the same women who have provided us with light and hope, who bring us on this planet, are offered the gift of dignity, health and sanitation.” He added, “I hope that following BHEL’s noble and vital CSR example, many other companies will come forward, especially those based in Haridwar, to work together and beautify their city. They should become the hosts to the upcoming Kumbh Mela playing their critical part in a Clean, Green and Eco-Friendly Kumbh Mela. Let the Kumbh Mela in 2021 be a Prerna Parv (A Season of Inspiration and Innovation).” The DM declared, “It is the duty and responsibility of each organisation to contribute to society, especially in the betterment and progress of the area where they are working. BHEL has always led the way.” Director Anil Kapoor emphasised BHEL’s commitment to the Swachh Bharat and Namami Gange Mission. He disclosed that 22 of the 25 toilet structures had been completed, while 3 were remaining. These would be completed soon. Senior Director, FICCI, Nirankar Saxena was recognised for his instrumental role in driving these projects to completion. The bio-digester technology has been developed by DRDO, using harmless anaerobic bacteria process which naturally dissolves all waste. The only output is clear, odorless, virtually pathogen free water, which can be used for irrigation. Clean biogas is also produced, which can then be harnessed to provide power for households, entire villages and even automobiles!