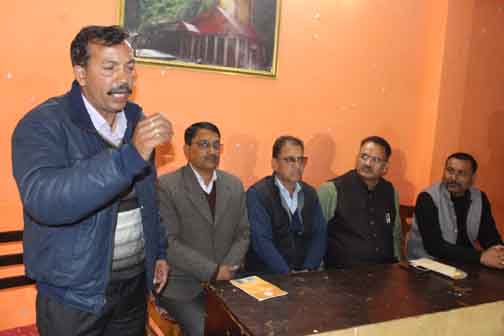 Mussoorie, 28 Nov: A review meeting was held by the BJP on losing the municipal election in Mussoorie under the leadership of Mussoorie MLA Ganesh Joshi and District President Shamsher Singh Pundir. A ruckus was created by BJP workers demanding immediate expulsion of those who had worked against the party and candidate.

They also alleged that senior BJP leaders hadn’t worked during the election, which was why the election was lost. It was claimed that that winning would not have been a big task if BJP legislators and other leaders had properly supported the candidates. Unfortunately, some people had worked for the opposition candidates while, in many wards, the BJP members stood against official nominees. For this reason, many members assured of victory also lost and the BJP could not even open its account.

Ganesh Joshi and Shamsher Singh Pundir said there was resentment against the unfortunate defeat of the BJP candidates. Some people had deliberately undermined the Mussoorie contest through a conspiracy, which would not be tolerated. The Mussoorie unit has submitted a list of anti-party activists against whom action would be taken by the party.

Mussoorie BJP President Mohan Patwal and BJP leader OP Uniyal said that the workers were angry at having been defeated by their own people. At the same time, the booth level management was not strengthened, either. They assured action against those who had betrayed the party.