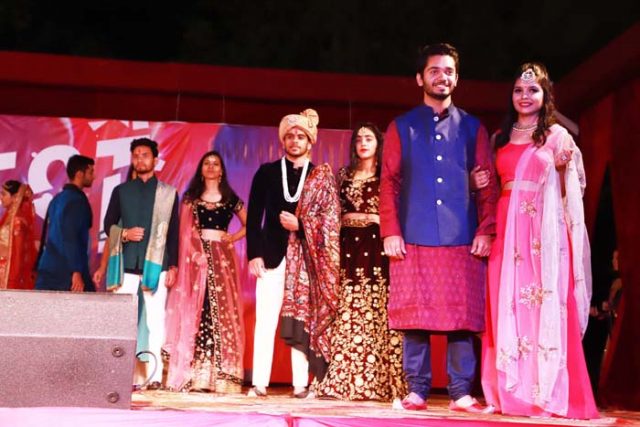 DEHRADUN, 25 Oct: The BTech course won the Overall Championship in the Cultural Competitions at the 25th Annual Cultural Fest of Graphic Era Deemed University. The Championship Trophy was presented by Prof Dr Kamal Ghanshala, Chairman, Graphic Era deemed University, at an award ceremony held last evening. Dr Ghanshala also gave cash prizes to the participants who performed best in the cultural fest. The 3- day cultural festival witnessed traditional dances, classical dances, Bollywood songs, fusion dances and open mic performances. Students of various courses of the university participated in this cultural fest and gave a demonstration of their talent which was evaluated by special jury members. Ashutosh of BTech came first in the solo singing competition, Shaurya Vikram, student of BBA, came in second place, and Srijana Rana, student of BCom, was third. In the Solo Dance Competition, Aditya Rawat of BTech, Nandini Goyal of BBA, and Sneha of BCA got first, second and third places. Ayush of BSC IT was the first to tickle the audience with the stand-up comedy at the Open Mic event, while Aayush Rohilla and Pratyaksh got second and third places. The “Raika” team, which spread the flavour of dance with Rajasthani folk, bagged the first position, whilce “Bhangra Beats” came second and “Favorite 5” of BCA got third place in the Group Dance competition. Strummers from BCA bagged the title of The Best Band, while Muskan Semwal student of BBA, Dhankar of Biotech, and Vaibhav from BTech were declared to be the Best Anchors. The main attraction was the Fashion Show presented by the students of MBA, Graphic Era Deemed to be University. Prof RK Shar ma, Vice Chancellor, Graphic Era Deemed University, presented the prizes to the students. One of the highlights of the programme on the last day of this cultural festival was Sand Art, which featured Akash Gupta, student of Graphic Era, who made an image of Chairman Prof Dr Kamal Ghanshala. Paras Arora, alumnus of Graphic Era University, currently working at Amazon USA, came to the event and shared his experience with the students and also thanked Prof Dr Kamal Ghanshala to guide and motivate the students. The programme was attended by several dignitaries along with the teacher and student fraternity.