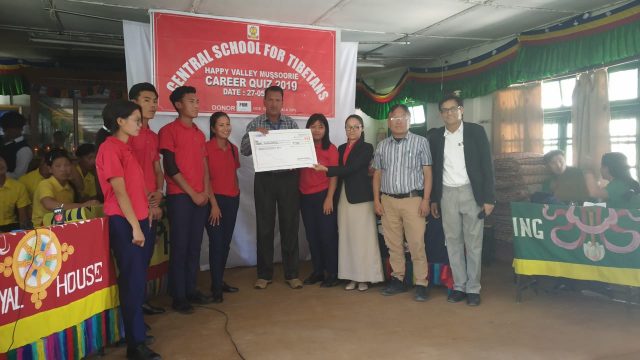 By OUR STAFF REPORTER
Mussoorie, 27 May: The Central School for Tibetans, Mussoorie, today organised an Inter House Career Quiz 2019. The competition was based on the various career options available for a student after passing class XII. Senior students of all the four houses, namely Choegyal, Desi, Taring and Thumi were the participants at the event.
The Inter House event was witnessed by senior students of the school. The entire Quiz generated excitement among the audience with the tricky questions.
The event was sponsored by PRM (USA) and the Department of Education, Central Tibetan Education (DOE Dharamsala).  The quiz was divided into Sherig round, Max View round, Career option round, Rapid fire Round.  Any wrong answer was penalised with minus marking so the final answers were given with many thoughts.
Tenzin Rigthan, Career Counselor of the Department of Education, Dharamsala, was the Chief Guest of the day and the Chief of Jury for the Quiz Competitions. She was also consulted in framing the questions for the event.
Finally “Choegyal ” House was adjudged the winner after scoring seventy-three points. The House got a cheque of Rs 2400 as the prize amount. The second position bagged by “Desi” House by scoring 66 points. It got an amount of Rs 2000. “Taring” House got the third prize with a cheque of Rs 1600. A consolation amount of Rs 500 was awarded to “Thumi” House. Each house master also got an amount of Rs 500 for their respective houses.
Principal SP Singh, Rector Thakchoe Tsering and DOE Counselor Rigthan gave away the cheques to the winning Houses. Rigthan congratulated the conveners, participating students and audience for the thrilling event. The Department of Education, Dharamsala, was also thanked for sponsoring and financing the entire programme. Dolker Wangmo, Chief Counselor of DOE, Dharmsala, has been thanked by the Coordinator and authorities for her initiatives to organise such programmes at school levels. ASS Kanderi, Teacher Counselor, coordinated as Quiz master and JM Lakhera worked on Audio–Visuals. Thakcoe Tsering, BS Kathait and Nitin, RK Mishra were the other members of the organising team.