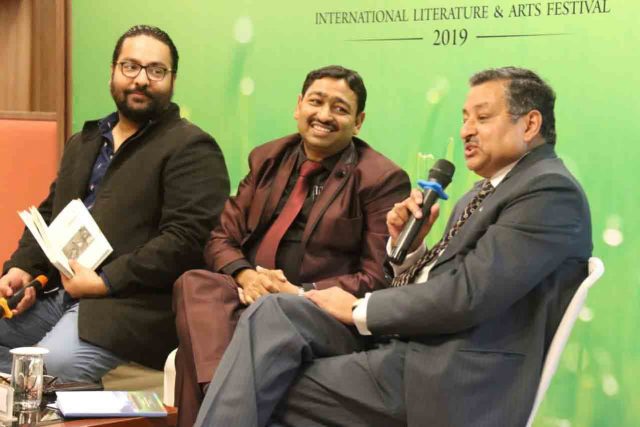 Dehradun, 17 Nov: Senior bureaucrat Dr Kush Verma today stated that, in spite of the challenges that the civil services posed, it was still the top choice career choice in India. Verma was in conversation with another burueacrat RVS Kapur during the discussion on his latest book A-Z of the Civil Services. DG Law & Order of Uttarakhand, Ashok Kumar chaired the session. During the discussion, several questions were thrown by Kapur at Verma relating to his witty account of the bureaucracy in India and were responded to by Verma in a very lighter and humorous vein. In response to Kapur’s query why he wrote a book such as this, Verma, a retired senior IAS Officer of 1979 batch in UP Cadre, said that he had been blogging about various aspects of a bureaucrat’s life and career when the publishers demanded that he bring out this in the form of a book. He disclosed that the 26 chapters of his book were numbered alphabetically A to Z and each letter was the defining word of each chapter.
Speaking about the bureaucratic service, Verma emphasised that despite the limitations and challenges involved in the civil services, it was still the most preferred career option in the country because the bureaucrats could become a factor in framing public policies. Kumar added that the civil services recruitment was still conducted very fairly and this service offered an opportunity to move up the strata in the society. The civil servants had the opportunity to interact with every section of society, from a common man to the persons holding very high echelons in society. Kapur reminded him that, in his book, Verma had mentioned that civil servants were born in heaven but lived in hell. Verma had a witty answer to this. He said that he had used provocative phrases in his book to bring out the irony in a lighter vein. Chapter B of the book talks about the Bosses, the Good, Bad and the Obnoxious. Speaking about this, Verma stated that the bosses of good types were those who took the greater share of the blame on themselves while giving greater credit for good to their subordinates, conceding that the good bosses were becoming rarer as compared to the past. He also added that it was difficult to tell who were more bad as bosses, the bureaucrats or the politicians, and felt that politicians were generally less “poisonous” than the bad bosses.
Chapter G talks about Good governance or the lack of good governance, while chapter R talks of the Rules and is titled Rules are for Fools. Speaking about the rules, DG Law & Order Ashok Kumar felt that rules were sometimes broken because they offered leeway. If the rules were broken in the greater interest of serving the people, then there was no harm in breaking certain rules.
Both Kumar and Verma agreed that ego was the basic reason for the District Magistrates and SPs or SSPs of a district being at loggerheads with each other. Kumar emphasised that, if the civil servants had the will to serve the people, they could actually make a big difference. In response to one question, Verma admitted that many of the civil servants did not reach out to the people and were not accessible easily for the common man, he emphasised that this trend however could not be generalised.
The book is full of anecdotes, perceptive quotes and hilarious sketches and offers a kaleidoscopic perspective of life and career of civil servants and does not hesitate to point out various maladies afflicting the services.