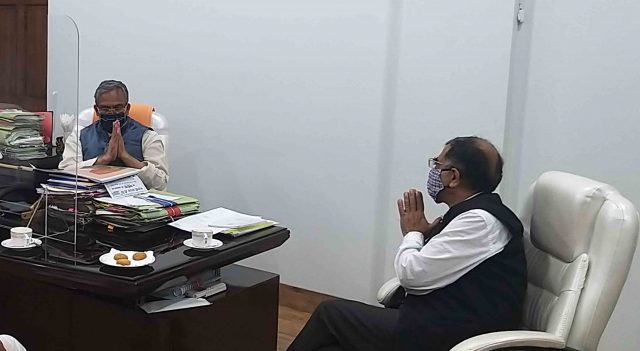 Dehradun, 16 Oct: Cultural activist and former MP Tarun Vijay met CM Trivendra Singh Rawat at his official residence, today, and discussed development of the Jagat Gram Ashvamedh Site into a major international tourism destination for general as well as academic tourists. The CM assured all possible help and approved Rs 2 crores for the access road and promised to visit the site soon.
Just 38 kilometres from Dehradun city, the Jagatgram Ashvamedha site lies in the Yamuna Valley where King Sheelvarman had conducted four Asvamedha Yagyas in the 3rd century CE. The Yagya Vedi is in the form of a flying Garuda.
Tarun Vijay said that, in spite of political activities and a hectic administrative schedule, CM Rawat had found time to save a rare archaeological site, which spoke volumes about his deep rooted interest in Hindu culture preservation.
Though the site was declared a national monument of importance, ironically there is still no access road to it, and scholars have to pass through private property to see the monument. Several hundred bricks used in the Garuda Ashvamedha 1700 years ago have Sanskrit inscriptions in Brahmi script and are preserved by ASI in Delhi.
It is worth noting that, for the last several months, Tarun Vijay had been trying to put the 3rd Century great Ashvamedha site on the tourism map and got funds sanctioned by DG, ASI, for improving the site as well as removing some eyesore constructions in the area.
Unfortunately, at the present, the Ashvamedha site is ill maintained with no access road, no signage, and no publicity. Tarun Vijay appreciated Trivendra Singh Rawat’s commitment to preserve and popularise the site, which would prove a boon to Dehradun and the state in terms of archaeological importance and tourist influx in the future.