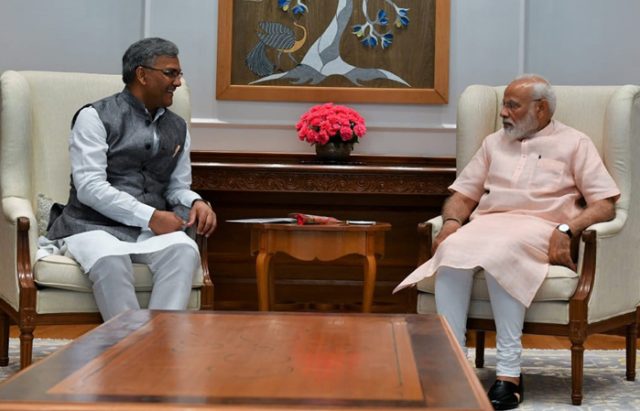 By OUR STAFF REPORTER
Dehradun, 3 Jun: Chief Minister Trivendra Singh Rawat made a courtesy call on Prime Minister Narendra Modi in New Delhi on Monday.
Interacting with media afterwards, Rawat said that various development related issues of Uttarakhand were discussed on the occasion. These included preparations for the 2021 mahakumbh in Haridwar, the state’s hydro projects, etc.
The Prime Minister assured all possible assistance in the matter. He also told the Chief Minister about his experience of his latest visit to Kedarnath.
The CM said that many of the state’s hydro projects were in limbo after the 2013 natural disaster. These were almost complete but completion was delayed because of certain reasons. If the NGT and other agencies extended their cooperation, the projects would be completed. Despite the fact that Uttarakhand purchased electricity worth Rs 1000, it had the lowest tariffs.
Rawat also asserted that owing to the Prime Minister’s special devotion to the Kedarnath Shrine, the number of pilgrim arrivals had increased substantially. On the average, 13,000 pilgrims were visiting the shrine daily.