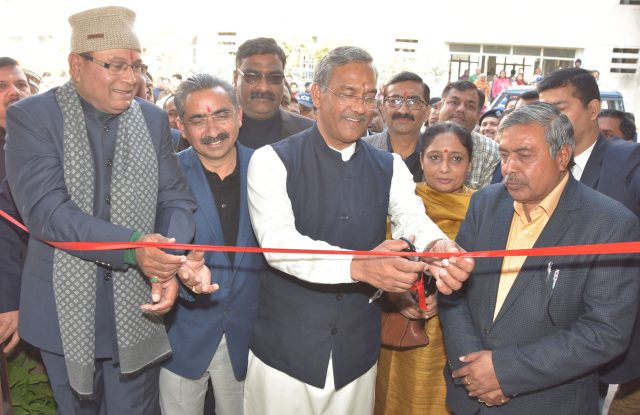 DEHRADUN, 1 Jan: As a New Year gift to Uttarakhand, Chief Minister Trivendra Singh Rawat laid the foundation stone of the 100-bed Pt Deen Dayal Upadhyaya Government Coronation Hospital, here, today. He instructed the Executive Committee that by 23 June, 2020, this hospital must be opened to the public under any circumstances. The work ought to be done of highest quality. Its construction needed to be done on twenty-four hour basis with the latest technology and facilities.
He said that with this project had ended the long time demand of Dehradun residents for a district hospital.
The Chief Minister announced that a proposal would be introduced in the next cabinet meeting, that an additional floor would be allowed to those constructing buildings in the hill architectural style. This would bring forth the state’s distinctive identity and art before the world. He said that the policies of the state government would prove a game changer for Uttarakhand, as he believed in permanent solutions to problems.
He also extended New Year greetings to the people of the state.
He praised doctors at the Coronation Hospital for working at a quarter of their earlier salaries in the private sector. He mentioned Neurosurgeon Dr Rahul Awasthi in this regard. Chief Minister said that the Deen Dayal Upadhyaya Government Coronation Hospital would meet present and future needs. It would be constructed on 8141 square metres, would have a total capacity of 136-beds, with 76 in the General Ward, 24 in the Burns Ward, 11 in the ICU, 9 in the Recovery Ward, 16 Emergency Beds and 4 in the Operation Theatre. It would be sophisticated and fully computerised. It would have facilities for MRI, CT scan, X-ray, blood bank, blood sampling, blood donation, etc. He assured that 108 emergency services would continue to function in the state.
Present on the occasion were MLA Khajan Dass, Ritu Khanduri, Secretary, Health, Nitesh Kumar Jha, Chief Medical Officer Dr SK Gupta, etc.