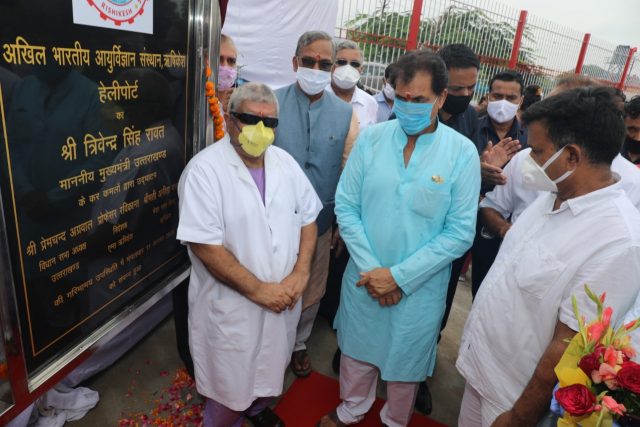 Rishikesh, 11 Aug: Chief Minister Trivendra Singh Rawat inaugurated the air ambulance helipad at the All India Institute of Medical Sciences (AIIMS) Rishikesh on Tuesday. He said on the occasion that this facility would provide people with serious injuries in disaster or road accidents the opportunity to be transported to AIIMS for immediate treatment by air ambulance.
On arrival of Chief Minister Trivendra Singh Rawat at the Institute, AIIMS Director Professor Ravikant welcomed him with other officials.
CM Rawat expressed satisfaction that with the helipad at AIIMS, in the event of disasters in far-flung areas, the injured and seriously ill people could be immediately transported to AIIMS Rishikesh for medical care.
He reminded that a large number of people are injured in Uttarakhand state during natural calamities from time to time, hence AIIMS’s helipad would prove very beneficial. The Chief Minister congratulated Director Professor Ravi Kant for setting up the helipad at AIIMS and described this initiative as a concrete step taken to provide health facilities to the people of the state.
The CM also claimed that Uttarakhand was the first state in the country where the Ministry of Disaster Management was working in a different way.
Director Professor Ravikant said it was the endeavour of AIIMS to provide full health benefits to every patient who reaches the hospital. He said that with the introduction of the helicopter service at the institute, people of Uttarakhand state would be served by reducing trauma, stroke, heart attack, organ transplant and maternal mortality.
Heli Services Incharge, AIIMS, Dr Madhur Uniyal said that the benefit of this service in the true sense would be available to the people of the state only when the air ambulance service provides immediate health care to the serious patients living in inaccessible areas of the state. He hoped that the state government would work in this direction. He appreciated the cooperation given by Pradeep Kumar Kharola, Secretary, Union Civil Aviation Ministry, in starting the heli-ambulance and helipad service.
On this occasion, the AIIMS Air Rescue Team also performed a mock-drill to transport the injured from the hospital during the disaster.
Also present were Vidhan Sabha Speaker Prem Chand Aggarwal, Rishikesh Mayor Anita Mamgain, KK Singhal, Deputy Director, Administration, Anshuman Gupta, Dean Prof Manoj Gupta, DHA Prof UB Mishra, SE Anurag Singh, EE NP Singh, Public Relations Officer Harish Mohan Thapliyal, Law Officer Pradeep Chandra Pandey, etc. 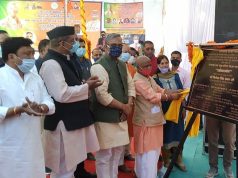 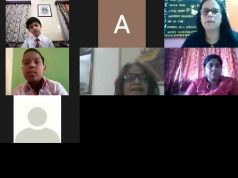 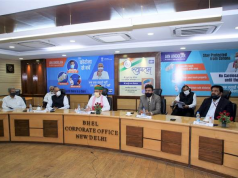