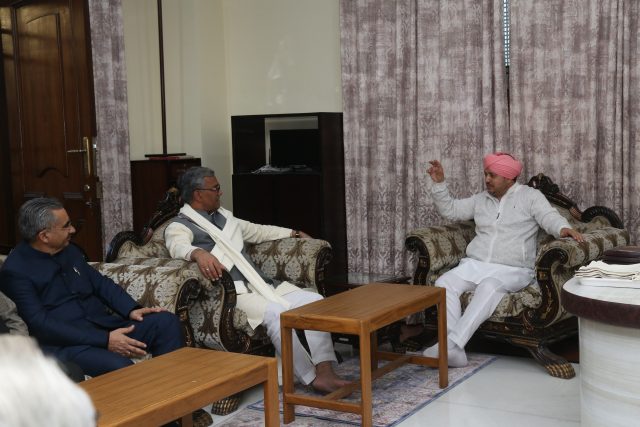 DEHRADUN, 25 Nov: Chief Minister Trivendra Singh Rawat paid obeisance at the Guru Ram Rai Darbar Sahib here, today, and had a meeting with Mahant Devendra Dass. He discussed various plans regarding development of the state. The Mahant congratulated the State and Central Governments for the development works being carried out by them. The Chief Minister reached the Darbar Sahib at around 4 p.m. He was welcomed as per the protocol and tradition of the Darbar Sahib. After paying obeisance at the Darbar Sahib, a meeting took place between the Chief Minister and the Mahant. Both of them discussed measures to stop the migration of youth from the Uttarakhand Hills, the conservation of Rispana River, giving a boost to organic farming, a polythene free state and various other developmental activities. The Mahant also extended best wishes for the tenure of Prime Minister Narender Modi and the future. Chief Minister Trivendra Singh Rawat praised the works of the Shri Guru Ram Rai Education Mission. He said that, in the field of Health, Shri Mahant Indiresh Hospital was working as a reliable partner with the state government, while the SGRR Education Mission was providing quality education at affordable prices to the students. He said he was optimistic that, in the future also, the SGRR Education Mission and Shri Mahant Indiresh Hospital would play key roles in the welfare of the people of the state.