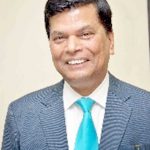 “Philanthropy in the Aditya Birla Group is rooted in a rich past and I humbly add that it is moving towards a promising future. Service to society is at the very heart of our value system, our dream for India is the India of inclusive growth…the country where every citizen lives a life of dignity.” These words of Rajashree Birla, Chairperson, Aditya Birla Centre for Community Initiatives and Rural Development, speak volumes about her being a tireless protagonist of a silent positive change. Known to be deeply spiritual, Rajashree Birla strongly holds that compassion is the only currency that counts.

Albeit belonging to an illustrious family, she is recognised for her simple tenacity and down to earth nature.

She feels extremely blessed to have been born to parents who embedded strong values in her. She strongly feels that being a part of the Birla family has been a singular blessing – Ghanshyam Das Birla, the founder of the Birla business empire, being one of her strong role models who taught her the responsibility of giving ‘back to society’. She continues to guard the legacy closely.

By her own admission, Rajashree Birla has always been deeply touched by the plight of the underprivileged, so she has taken multiple initiatives in her pursuit of making a positive difference to the lives she touches. The first step in this direction was to open an orphanage to care for destitute children. This was the concern of Aditya Birla, a humanitarian par excellence, as well. A strategy of building a home for children was blue printed….thus Mangal Mandir, re-christened Aditya Birla Centre for the Welfare of Children, a new abode for destitutes was born.

Passion for education is not new with the Birlas. They started a school in Pilani about a century ago and the rapid growth of schools continued unabated. Rajashree Birla has carried on the tradition with equal passion. The Group, under the guidance of Rajashree Birla is facilitating mid-day meals for more than 400 schools in Odisha, UP, Rajasthan and Gujarat. She mentors 56 schools of the Group spread across 14 states of India. Her strong value system has an imprint in all 56 schools. She started a school named, Parvati Radhakishen Fomra School in the heartland of Braj-Mathura, in fond memory of her parents, Parvati Devi Fomra and Radhakishen Fomra. She is deeply attached to the school handcrafted by her. It was so pleasing to see that during the inauguration of the school, she would fly all the way from Mumbai to Mathura to see the run through of the cultural programme. She and her sisters make it a point to visit the school on the Founders’ Day, every year. She is equally fond of the school recently started in Bhubaneswar.

Mrs Birla has a passion also for the performing arts. In her annual address to Principals at Gyanodaya, Aditya Birla Management Centre, Mumbai, she strongly emphasises on the importance of performing arts for the development of soft skills among students. As a patron of art and culture, she heads the Sangeet Kala Kendra, a Centre for performing arts, as its president.

Healthcare has been one of the major concerns of Mrs Birla. In the Medical Camps organised under her patronage, over a million patients are treated – 22 million have been immunised against polio over the last five years. For her outstanding contribution in this drive, she was bestowed the Polio Eradication Champion Award in 2008 by the government. Aditya Birla Memorial Hospital, Pune, a multi-super-speciality hospital, is an outcome of Smt Birla’s concern for quality medical treatment.

In recognition of the exemplary work done by Smt Birla, leading national and international organisations have showered accolades upon her. Among these, the most outstanding one has been the Padma Bhushan Award in 2011 in the area of Social Work. In 2010, she was the recipient of the Global Golden Peacock Award for CSR. The list of accolades is endless. CSR continues to be her way of life. In her own words, “We transcend the conventional boundaries of business because we care. I find that our work in communities and my involvement has endowed my life with a sense of purpose…I feel closer to my maker through this selfless service…it gives me peace and tranquillity.”

Our salute to this Karmayogini who leads by example… on your birthday Ma’am, we wish you peace, good health and happiness. May you continue to brighten the lives you touch.