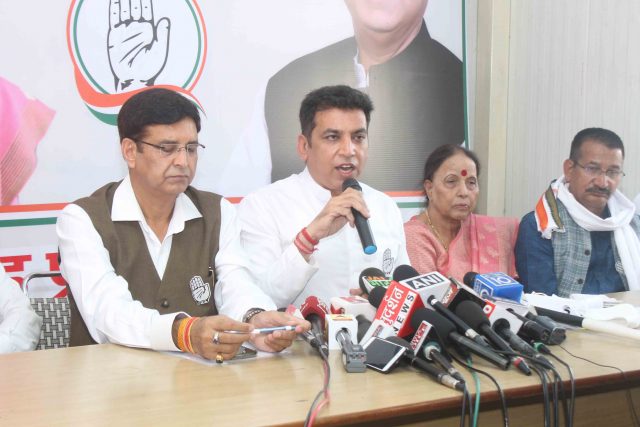 By Our Staff Reporter
Dehradun, 28 Oct: The Uttarakhand Congress today demanded Chief Minsiter Trivendra Singh Rawat’s resignation on moral grounds following an order of the Uttarakhand High Court directing a CBI inquiry into allegations against him levelled by two individuals, Umesh Sharma and Rajesh Sharma.
Addressing the media at PCC Headquarters here, today, PCC Chief Pritam Singh, former CM Harish Rawat, State In charge of the party affairs Devendra Yadav and the Leader of the Opposition, Indira Hridayesh, asserted that it was a serious matter as a CBI inquiry had been ordered against Chief Minister Trivendra Singh Rawat by the Uttarakhand High Court and he had no moral authority to continue as the CM. The Congress leaders asserted that they would call on the Governor and demand she dismiss the BJP Government!
Congress leaders said it was ironic that Chief Minister Trivendra Singh Rawat claimed his was a zero tolerance government against corruption, but the High Court was ordering a CBI inquiry against him. The Congress had already sought time from the governor in this regard. Harish Rawat said there was major difference between the words of the CM and the actions on the ground. Yadav said that, when Trivendra Singh Rawat was in charge of Jharkhand in 2016, the matter of transfer of funds to the accounts of Chief Minister Trivendra Singh Rawat’s family and close relatives had become an issue and this was a very serious allegation. The government had denied these allegations and had lodged an FIR against the accusers. Now, the High Court had ordered a CBI inquiry into the matter and ordered lodging of an FIR in two days in this respect. Following this, the CM had no moral authority left to continue in office and ought to resign. The Congress leaders alleged that the Chief Minister took advantage of his position and tried to suppress the charges and harass the accuser. Former Chief Minister Harish Rawat said that investigation of these serious allegations had become necessary on the orders of the High Court. Trivendra Rawat ought to resign from the post of Chief Minister in order to ensure a fair investigation and to ensure clean administration in the state. BJP ought to accept its moral responsibility for such serious charges. He added that the central leadership of the party was also exposed in this case. Trivendra Singh Rawat did not have any right to continue as CM. The Congress leaders would call on the Governor and demand dismissal of the government. He added that the party expected fair action in favour of justice from the governor.
Leader of the Opposition Indira Hridayesh said that the High Court order had put the government in the dock. On this occasion, former PCC Chief Kishore Upadhyay was also present.