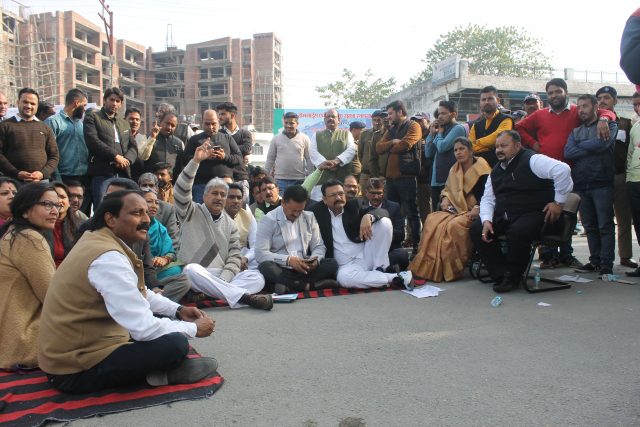 DEHRADUN, 5 Dec: Soon after the House assembled and the Question Hour began on the second day of the winter session, today, Leader of the Opposition Indira Hridayesh informed Speaker Prem Agarwal that policemen and the security staff of the Vidhan Sabha had not allowed Congress MLA Karan Mahra to enter the premises just because he had come in a vehicle other than the authorised one. Not satisfied with the response of the Speaker, along with other Congress members present in the House, she walked out in protest. Consequently, the Congress boycotted the entire day’s proceedings.
Earlier, objecting to the denial of permission to enter the Assembly premises by policemen, she claimed that it was a serious issue and added it was a breach of privilege if the MLAs were not permitted to enter the House. She demanded action against the guilty police officials, who had refused to allow member Karan Mahra to enter the premises. She further informed the House that Mahra and other Congress members were sitting in protest outside the premises and were demanding action against the guilty officials.
To this, Speaker Prem Agarwal responded that the issue had been brought to his notice and he had already directed that MLA Karan Mahra be permitted to enter the premises in the vehicle other than the authorised one. To this, Indira Hridayesh responded that there could be many reasons for the members to reach the Vidhan Sabha premises in vehicles other than the permitted one and this was not a basis on which MLAs could be stopped from entering the premises.
Agarwal was briefed on the development by the Chief Marshal and then informed Congress members that the MLA had been already permitted to enter the House in the vehicle he had come in, but he was insisting that those accompanying him be also permitted to enter even though they did not have any passes. Hridayesh claimed that those who were accompanying Mahra were carrying passes but still were not permitted entry. She further claimed that today it was a Congress MLA, tomorrow it could be a BJP MLA and hence such behaviour by security staff and the Police ought not to be tolerated. Former Speaker Govind Singh Kunjwal claimed that, as per tradition, no MLA was denied entry if he or she arrived in an unauthorised vehicle. Denial of entry was an insult to the MLA which could not be tolerated. He demanded strict action against the guilty officials.
The Speaker directed Parliamentary Affairs Minister Prakash Pant to speak to Congress MLAs and convince them to end the protest. Prakash Pant went out and tried to convince the members to end protest since the MLA and others had already been permitted to enter in an unauthorised vehicle, but they were in no mood to relent. When Pant returned to the House, he informed the Speaker and the House that he had already ordered an urgent inquiry and pending it, he had ordered the two policemen concerned to be sent to the police lines. However, the Opposition members were not convinced and staged a walk out. The boycott continued throughout the day outside the gates of the Assembly premises. Other local Congress leaders also joined the protesting party MLAs.
Following the lunch break, the House was adjourned till 6 p.m. and following assurances, the dharna ended in the evening.