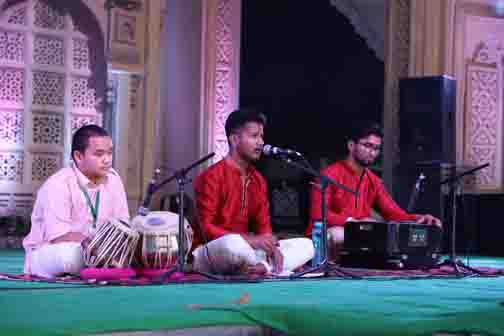 DEHRADUN, 14 Oct: Virasat Sadhana is a platform for the students of various schools of Dehradun to showcase their talent. Today’s section of the Virasat Festival began with the participation by various schools. The performances included Kathak by Gauranshi, Hindustani Vocal by Aryan and Tabla by Om Thapa from Raja Rammohan Roy Academy; Hindustani Vocal by Khushi, Kathak by Nandini and Tabla by Rohit Singh from SGRR Public School, Sahastradhara, and Tabla by Jayesh Anand from The Asian School Included in the main events held today was a performance by Meeta Pandit, who is from the Gwalior Gharana of Hindustani Classical Music. She is the grand-daughter and disciple of Padma Bhushan awardee Pt Krishna Rao Shankar Pandit, the doyen of Northern Indian Classical music in the 20th century, and the daughter and disciple of legendary Pt Laxmanrao Krishnarao Pandit. Meeta is the sixth of the unbroken Pandit line and has the unique distinction of being the first woman musician in the family. Her melodious and robust voice coupled with intricate handling of ragas has won her critical acclaim, and a large following of music lovers. A PhD in Music, Dr Meeta Pandit has won many national awards like ‘The Golden Voice of India’, ‘Sur-Mani’, ‘Yuva Ojaswini’ and the ‘Yuva Ratna’ along with the ‘Young Achiever of the Year’ in the field of Hindustani Music by FICCI. Leading magazines of India such as ‘India Today’ and ‘The Week’ have featured her on their lists. In 2007, she was awarded the highly prestigious ‘Ustad Bismillah Khan Yuva Puraskar’ by the Sangeet Natak Akademi. In 2015, she was awarded the Yuva Ratna Samman at the SaMaPa Award ceremony by the Sopori Academy of Music and Performing Arts. She has been awarded the Birju Maharaj Parampara in 2015, Bhav Bhaveshwar Rashtriya Samman in 2015, and JP Award in 2017 by Loknayak Jaiprakash International Studies Centre. The performances also included Yesteryears’ Bollywood Music on the Accordion & Hawaiian Guitar by Sanjeev Sachdev and Sonali Nath. The instrumental music of Sanjeev and Sonali has crossed the boundaries of the heart to touch the soul. It elevates the pleasure of the listeners to a new level by adding a hitherto unknown dimension to instrumental music. Sonali plays Hawaiian Guitar and Sanjeev, the Accordion. For the first time, these two very ‘wonderful’ instrumentalists combined together to weave the tunes of all-time great songs and bring out the essence of the songs. Together they have performed on innumerable number of stages and have earned huge appreciation and recognition. Sanjeev, in spite of leading a busy life of an industrialist, is popularly known as a great musician. He is a well-known name when it comes to music arrangement and accompanying famous vocalists in the field of Bhajan, Ghazal and Hindi film songs of the golden era. Sonali has been a student of Music since her childhood. A student of Hindustani Vocal Classical Music and Rabindra Sangeet, she fell in love with the songs of Sunil Ganguly, the famous artist on the Hawaiian Guitar. She became his disciple and through sheer tenacity and dedication today has earned her place alongside her Guru. The performances on 15 October will include Virasat Sadhana at 10 a.m. At 6:30 p.m., there will be Kathak and Chhau fusion ballet by Swati Sisodia and Group from North Central Zonal Cultural Centre; Thumri Gayan by Kumud Dewan; and Hindustani Classical Flute by Pravin Godkhindi.