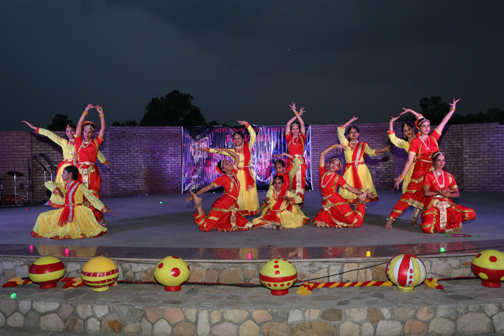 By OUR STAFF REPORTER
Dehradun, 17 May: The tranquil evening, today, bore witness to an Inter House Music and Dance Talent Fiesta at Doon International School, Riverside Campus. The evening resonated with spirited rhythm and songs set in an electrifying ambience. The serenity was soon converted to vehement cheering of the four Houses: Churchill, Gandhi, Lincoln and Mandela, which competed in various categories like Classical Dance, Folk Dance, Contemporary Dance, Free Style Dancing, Rock Band, Classical singing, English and Hindi Choir.
The platform not only exposed the students to different styles of dance and music but also built in confidence to display it effectively on stage. Fervour commenced with the ceremonial lighting of the lamp by Directors HS Mann and Sonika Mann. Thereafter, the programme kick-started with the junior school dancing to a musical play, titled ‘Shiva-The Bahubali’. Their performance showed Shiva as an omniscient yogi who lives an ascetic life and without whose permission nothing moves. This was followed by a dance and song sequence by the tiny tots of classes 1, 2 and 3.
Up next, all the four houses put their best foot forward to display their musical talent in various categories. The students’ musical talent came to the fore as they rendered Indian and Western tunes confidently and melodiously. The first category was the Hindi Choir in which students came up with Bhopali Rag, Bhajan, Ritu Rag and Sufi Songs. In the next category, all four houses enthralled the audience with the Live Music Band which made each student in the crowd hope for victory. The vivacious dancers set the floor on fire with their energetic performances. Mandela initiated a tough competition through their free style dancing. This was followed by the Contemporary Dance of Gandhi House, Classical Dance by Lincoln House and, finally, the fun filled extravaganza by Churchill House offered folk dance forms of Maharashtra, Assam and Punjab. The young aspiring singers and dancers enthralled the judges and the audience with their well choreographed performances. Each house was successful in outperforming the other. The spectators bore witness to the enthusiasm and energy of the young Riverians as they enthralled everyone with their performances.
No competition is complete without the breathtaking suspense before the announcement of results and amidst loud cheers and guesses, Gandhi House was declared the Music Champion and Churchill House grabbed the Dance Champion’s Title. The Overall Winner was Gandhi House and Sonika Mann was requested to do the honours of presenting the Fervour Trophy. In his address to the students and staff, HS Mann commended the efforts of the students. He said that he could imagine the country’s future, which rests in such talented voices. He emphasised on winning and losing to be a part of any competition and when children perform, it was winning in itself.