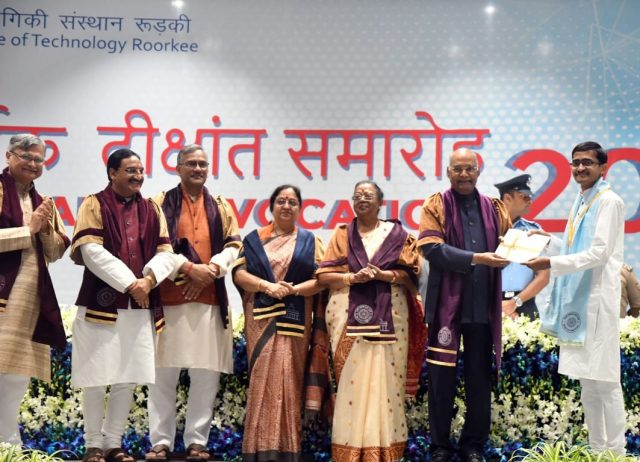 ROORKEE, 4 Oct: President Ram Nath Kovind presented degrees to students at the annual convocation of IIT Roorkee, here, today. Addressing the gathering, he said IIT Roorkee was not just a centre of education, it was also the hub of innovation and creative ideas. Research, Innovation and Creative thought would help the nation achieve its objectives and benefit humankind. As such, these values had to be encouraged, which was being done at IIT Roorkee with its Business Incubator and the assistance being provided to start-ups. Students could be encouraged to be creative by involving them in functioning of the academic institutions and decision making. President Kovind accepted that, at the present, the ratio of women in scientific and technical institutions was less than desired. Steps needed to be taken to increase their number. This would have considerable impact at many levels. He recalled in June 2018, he had suggested at the Governors’ Conference that universities adopt social responsibility. It was good that IIT Roorkee had involved student in such activities by identifying five villages for objectives such as water management, sanitation, skill generation, etc. They also took part in the cleanliness campaign undertaken on the ghats of the Ganga in Haridwar and Roorkee. Chief Minister TS Rawat congratulated the passing out students of IIT Roorkee and asked them to perform their duties by associating human behaviour with S&T. He asked them to practice Yoga to reduce the stress faced in the present age of competitiveness. He asked them to contribute to the PM’s target of making India a 5 trillion dollar economy. Union Minister of Human Resource Development Ramesh Pokhriyal ‘Nishank’ asked students to make the best of the education they had received at IIT Roorkee. Professor Ajit Kumar Chaturvedi provided a glimpse into the activities of the institution. Also present on the occasion were First Lady Savita Kovind, Governor Baby Rani Maurya, Chief Secretary Utpal Kumar Singh, DGP Anil Raturi, Commissioner, Garhwal, Raman Ravinath, IG, Garhwal, Rajiv Rautela.

Jump in Corona figures due to influx of migrants: Rawat