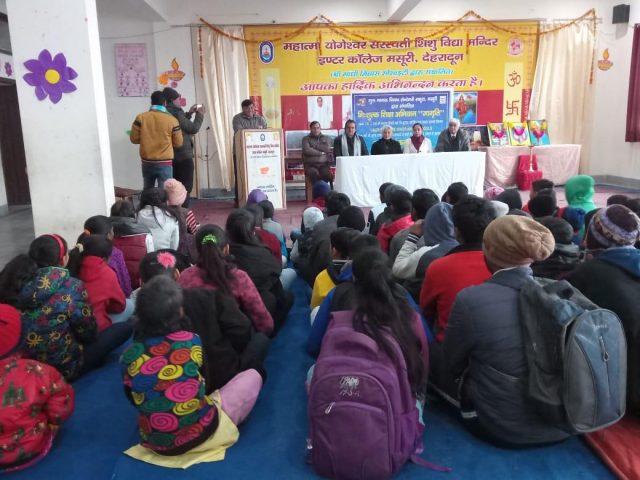 MUSSOORIE, 6 Jan: Guru Nanak Fifth Centenary School inaugurated its project, Jagriti – ‘Ignite Minds Awaken Souls’, here, today. In the second year, more 700 students registered themselves for special coaching classes. The Jagriti project was inaugurated by Councilor Jasbeer Kaur and Dean ND Sahni by lighting the ceremonial lamp. The purpose of the project is to teach talented children of various local schools of Mussoorie and nearby areas. Addressing media persons, Sunil Bakshi, Administrative Officer of the School, informed media that, last year, the school management had started the project to provide free coaching to the students of financially weaker sections of society studying in various schools of Mussoorie. Last year, 650 students of 14 schools of Mussoorie and surrounding areas benefited. He said that, after the enthusiastic response of the students and their desire to study further, School Chairman, the late S Jaspal Singh, decided to continue Project Jagriti, every year. Jasbeer Kaur praised the efforts of GNFCS teachers and management for Project Jagriti. All students are given a choice to choose their centres and accordingly the classes are held. Many local school Principals of Mussoorie and eminent social personalities enthusiastically supported the mission and have committed to provide their services. All present were thanked by GNFCS Principal Anil Tiwari. Special thanks were extended to Manoj Rayal, Principal, Saraswati Shishu Mandir, and Anuj Tayal, Principal, RN Bhargav Inter College for their selfless support. The inauguration ceremony ended with distribution of free notebooks and stationery.