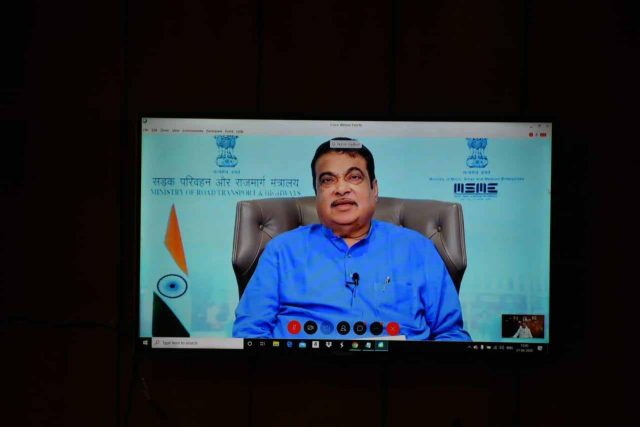 By OUR STAFF REPORTER
DEHRADUN, 27 Jun: Union MSME Minister Nitin Gadkari today said that greater focus was required in the MSME sector in order to boost the the economy of the country which was badly affected due to Corona pandemic. He was speaking on the occasion of release of the report of National Task Force of Global Alliance for Mass Entrepreneurship through a video conference. He released the report of the Task Force jointly with Uttarakhand’s Chief Minister Trivendra Singh Rawat, Chief Minister of Karnataka BS Yediyurappa, Chief Minister of Meghalaya Conrad Sangma and Education Minister of Punjab Vijay Inder Singla.
Gadkari said that to boost the Covid-19 affected economy it had become necessary to work fast in the field of MSME and with greater focus on this sector. MSME was a sector in which rapid growth could be achieved in the economy along with large scale employment generation. Every state had certain characteristics according to its geographical conditions. Many states had high potential in the field of Agro, MSME, Handloom, Handicraft, etc.
Union Minister Gadkari said that much could be done in the MSME sector towards creating a self-reliant India in the direction of Prime Minister Narendra Modi’s vision. One ought to focus on promoting industries as well as simplification of processes for industrial establishment in the states.
Chief Minister Trivendra Singh Rawat said that MSME was very important for the economy of the country, especially in states like Uttarakhand for economic development along with increasing employment opportunities. The whole world was currently affected by Covid-19. There had been a change in the methods of trading and work. In order to revive the industries affected due to lockdown, special attention had been given to the MSME sector in the Atmanirbhar Bharat package. He said MSME was the only sector where employment opportunities could be created on a large scale and the economy could be accelerated.
CM Rawat said that State Government was working closely with SLBC, banks and industrial organizations to extend the benefit of the Emergency Credit Line Guarantee Scheme applicable for MSMEs to eligible units under the Atmanirbhar Bharat Package. Under this scheme, approval of Rs 1835 crore and distribution of Rs 1067 crore had been made in 34671 eligible accounts in the state of Uttarakhand.
The CM said that the state government was constantly improving to promote MSMEs. Constant work was going on towards Ease of Doing Business. Effective implementation of a single-window system was being ensured. Mukhyamantri Swarozgar Yojana has been launched for youth and migrants returning home from outside under the circumstances of Covid-19. At the district level, the District Self-Employment Promotion and Monitoring Committees have been formed.  Rural Business Incubators were being set up to assist entrepreneurs in rural and hilly areas to collaborate in the processes required for enterprise establishment, value addition, packaging, and marketing.
The Chief Minister agreed to the proposal of the Global Alliance for Mass Entrepreneurship to develop an ecosystem for entrepreneurship development in Uttarakhand. He said that work was being done in a planned manner to encourage investment in the state. Work was being done through SIDCUL for Medical Devices Park, Pharma City, and Aroma Park, etc.
On this occasion, Additional Chief Secretary Manisha Panwar, IT Advisor to Chief Minister Ravindra Dutt, Economic Advisor Alok Bhatt, Director Industries Sudhir Chandra Nautiyal were among those present.