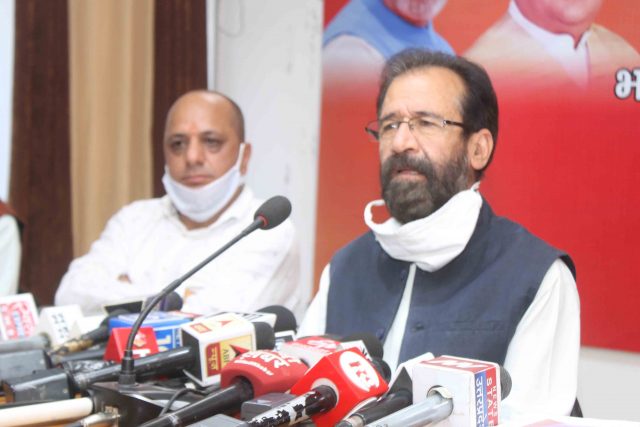 By Arun Pratap Singh
Dehradun, 28 Oct: Uttarakhand High Court’s judgement, yesterday, ordering a CBI inquiry into allegations levelled by certain people against Chief Minister Trivendra Singh Rawat has become a major political issue in Uttarakhand. Soon after the State Congress held a press conference on the subject here, today, demanding resignation of the Chief Minister following the ordering of an inquiry by the Court, BJP’s Chief Spokesperson Munna Singh Chauhan held a counter press conference at the BJP Headquarters, where he not only rejected the demand for resignation but also termed the High Court’s judgement as bad in law!
Chauhan claimed that the judgment was full of serious legal loopholes and, therefore, bad in law, and it would be challenged by the BJP Government through a Special Leave Petition (SLP) in Supreme Court. He also accused the Congress leaders of trying to mislead the public on the judgement and stated that nowhere in its judgement had the Court mentioned there was prima facie any merit in the allegations levelled by two individuals, Umesh Sharma and Rajesh Sharma. Chauhan added that the Court in para 71 of its judgement had itself mentioned that the accused Umesh Sharma had admitted to lying about the allegations and, if the Court still went ahead and ordered quashing of the FIR filed by an acquaintance of the CM, Harendra Singh Rawat, against the accused and further ordered a CBI inquiry, it was bad in law in the opinion of the BJP. He recalled that the FIR had been filed by the Police on the basis of a complaint submitted against Umesh Sharma by Harendra Singh Rawa to Dehradun Police. The FIR was registered for collection of evidence and, in spite of this, the FIR was quashed by the High Court, which was surprising and bad in law. The party was not satisfied with the judgement, which was legally wrong in its opinion and would be challenged vide the SLP in the Supreme Court.
He stressed that he was criticising the judgement which he had every right to do and not criticising the Court.
Chauhan added that, in the Court, the accused mentioned in the FIR, Umesh Sharma, himself admitted that the information published by him was wrong, then there could be no basis or justification for any kind of inquiry into the allegations levelled by him. Chauhan flatly dismissed the Congress demand that the CM resign on moral grounds. He said the Congress leaders were making this demand without any basis. He added that it ought not to be forgotten that Umesh Sharma, who had levelled baseless allegations against the CM through social media, had over two dozen cases related to serious crimes registered against him in 5 states of the country.
It may be recalled that a retired professor, Harendra Singh Rawat, had filed a case under various sections including blackmailing against Umesh Sharma with the Dehradun Police on 31 July. Consequent upon the complaint filed by Harendra Singh Rawat, a FIR was registered against Umesh Sharma and Rajesh Sharma, and Rajesh Sharma was even arrested. According to the FIR filed by the Police, Umesh Sharma had spread “misinformation” on social media that one Prof Amritesh Chauhan had collected the money from Jharkhand during demonetisation and deposited the same in the bank accounts of Harendra Singh Rawat and his wife Dr Savita Rawat. Sharma had gone further to claim that Harendra Singh Rawat was the brother-in-law of the CM and that the money had been collected by him on behalf of Chief Minister Trivendra Rawat. Sharma had further alleged that Savita Rawat was the sister of Trivendra Singh Rawat’s wife. None of this was true, Chauhan pointed out.
Chauhan added that Harendra Singh Rawat was not a relative of the CM as had been alleged by Sharma on social media and that the 11 bank accounts relating to Harendra Singh Rawat, mentioned by Sharma in his allegation, had actually not received a single rupee from Jharkhand. The entire allegation was baseless, he claimed, and therefore if any inquiry had to be held it ought to be against those who had levelled baseless allegations against the CM.