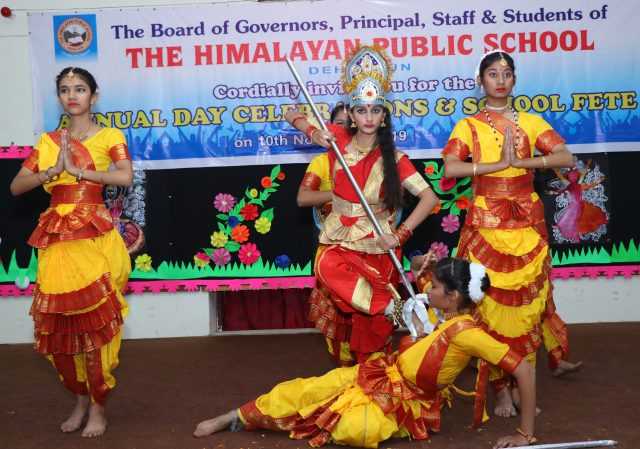 DEHRADUN, 10 Nov: The Himalayan Public School celebrated its 16th Annual Function cum Fete, here, today. The Chief Guest was Maj Gen Chander Nandwani and the Special Guest was RK Bakshi (Vice Chairman of the School). Chairman of the school Dr Adiya Arya, Secretary Archita Choudhary, Vice President, Finance, Ayush Vardhan Arya, Founder President Harsh Vardhan Arya also attended the Annual Function. The programme began with the inauguration of the school fete by the Chief Guest. After that various dance and skits were performed by the students of various classes. The Garhwali dance was the main attraction among the activities. Awards were given to students under various categories – Subject proficiency, Academics, Regular Attendance, SUPW, etc. Anju Arya Memorial Scholarships were given to 17 students out of which ICSE and ISC students were given a cash prize of Rs 2100, each. The Annual Fete, which was organised at the playground, was enjoyed by the students, parents and their friends and relatives. Many stalls were set up like games, eatables, etc. Tambola and candle lighting with one matchstick were enjoyed the most. The Chief Guest, School Chairman and Principal addressed the gathering. The programme concluded with the Vote of thanks by Secretary Archita Choudhary.