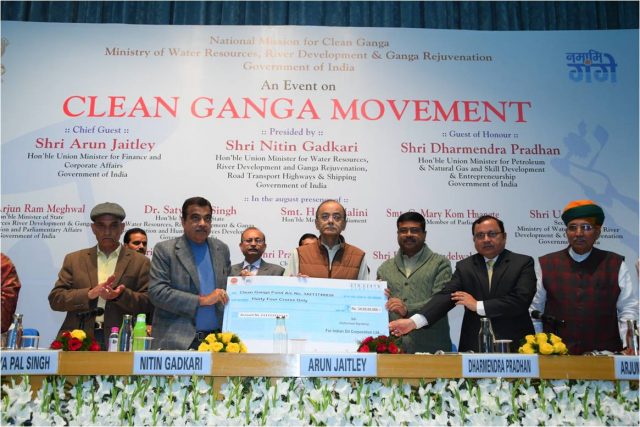 By OUR STAFF REPORTER
DEHRADUN, 27 Feb: As part of its Corporate Social Responsibility commitments, IndianOil contributed Rs 34 Crores to the Clean Ganga Fund today. At a gathering in New Delhi, Vinay Misra, Executive Director, UPSO-II, handed over a cheque of Rs 34 Crores to Nitin Gadkari, Union Minister of Water Resources, River Development and Ganga Rejuvenation, in the presence of Arun Jaitley, Union Finance Minister, Dharmendra Pradhan, Minister of P&NG; SD&E, Dr Satypal Singh, Union Minister of State for Water Resources, River Development and Ganga Rejuvenation, Arjun Ram Meghwal, Minister of State, Water Resources, River Development and Ganga Rejuvenation and Parliamentary Affairs, MPs C Mary Kom and Hema Malini, and Prasoon Joshi, Chairperson, CBFC.
The funds contributed by IndianOil would be utilised for the re-development of Har Ki Pauri in Haridwar. This famous ghat on the banks of the Ganga is a major tourist destination and a site of pilgrimage with an annual footfall of 1.2 Crore. IndianOil’s commitment to the redevelopment of this sacred Ghat would help make a Cleaner Ganga and provide several facilities to the people who visit Har ki Pauri every year.
With the funds contributed by IndianOil, Har ki Pauri Ghat would be transformed by beautification of the Ghat along with the creation of infrastructure facilities such as parking area, drainage system, landscaping, solar powered lighting, Cultural Kiosk and provision of CCTV cameras.
Minister Dharmendra Pradhan said that it was a privilege for the Ministry of Petroleum and Natural Gas and IndianOil to be associated with such a sacred mission. Pradhan also made a personal contribution of Rs 1 Lakh to the Clean Ganga Fund and urged the gathering to wholeheartedly support the Namami Gange Mission by making contributions.