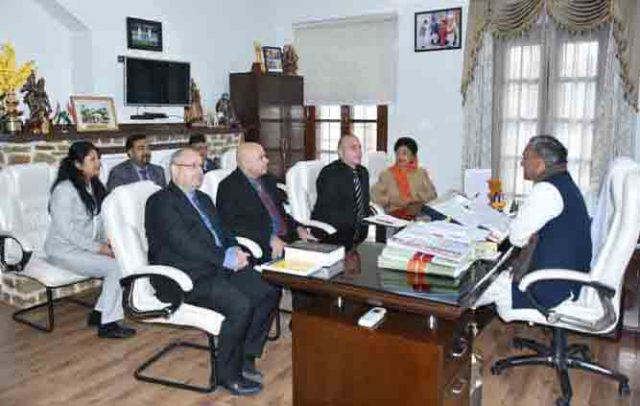 By OUR STAFF REPORTER
DEHRADUN, 26 Dec: An Israeli trade delegation, in a meeting with Chief Minister Trivendra Singh Rawat, has offered to set up Algae and Cannabis farms in Uttarakhand. The delegation met the Chief Minister at his official residence here on Wednesday.
An Israeli company, Puremagic Limited, informed the Chief Minister that it is interested in producing Haematococcus pluvialis, a species of algae, which is used in producing Astaxanthin, which is further used in cosmetics and nutritional supplements, with Israeli technology in Uttarakhand.
The Israeli company has also shown interest in farming and processing of GMP Cannabis (medicinal cannabis) in Uttarakhand, which has huge demand for medicinal uses in the Indian and world market. The delegation stated that Puremagic company is exploring possibilities of tying up with the Indian Industrial Hemp Association (IIHA) for farming and processing of medicinal GMP cannabis. The Indian Industrial Hemp Association (IIHA) is the lone licensee for hemp cultivation in Uttarakhand. The Israeli delegation will also inspect the cannabis farm of Indian Industrial Hemp Association (IIHA) in Pauri Garhwal on Wednesday. With the implementation of these projects, there would be the possibility of employment generation in agriculture, transportation, packaging and marketing fields.
Chief Minister Rawat told the Israeli trade delegation that the state government was working to provide more employment opportunities, checking migration and strengthening local economies based on local resources in Uttarakhand. He promised to provide all possible support for effective implementation of the proposals.
The chairman of Puremagic, Avi Pallad, Chief Executive Officer Tomar Pallad, Vice-President of Invest India Priya Rawat and Industrial Advisor to the Chief Minister KS Panwar were present on the occasion.