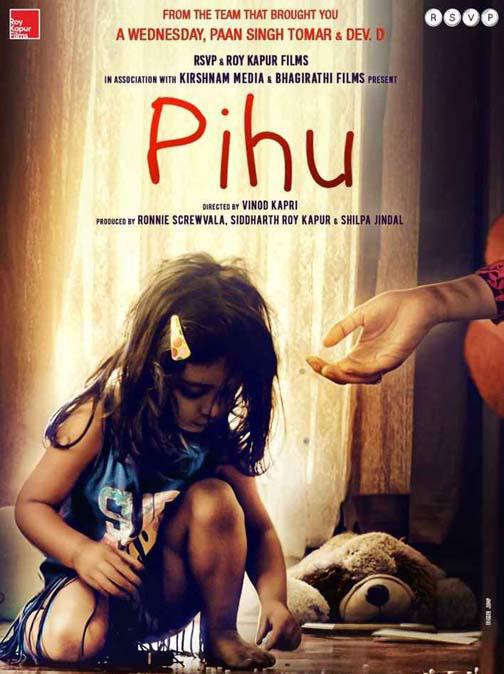 Pihu is an exasperating anddisturbingly nerve-wrecking,but awakening film. It is presented in the most natural get-up by the national award winning film director Vinod Kapri. The only protagonist in the film is a two-year-old child,Pihu, who remains the solo performer. It leaves a lump in the throat with a story that is a dramatized version of an ugly but real life incidence in the life ofPihu. The others are heard either through telephonic conversation or outside the flat’s door, giving a fair idea about themselves, narration and the story.

As the trailer of Pihu suggests, a mother is lying unconscious or dead on the bed in her bedroom on the first floor of a duplex apartment. Pihu, a role beautifully performed by Myra Vishwakarma,is seen spending her day trying on and off to wake her mom and then getting engrossed in other un-adorning activities all by herself with a potential danger lingering at every hook and corner inher own house. A child of her age is protected at every step by her parents or caretaker but what may happen in their absence is what Pihu draws our attention to. All the household equipment, gadgets, cleaning solutions, staircase, balcony, sleeping pills and perils present in the house arethe villains in the child’s life and  areused as props by the director to build the terrifying arena that the unsupervised child is exposed to. The obvious expressions and the behaviour of the child are captured raw and are age and circumstance conducive. How a child who is unfortunately trapped in that loathsome moment would react and act is cent-percent believable in the film, except for the dialogues of other invisible characters that we hear,which sound orchestrated.The camera too is quite revealing. Before picking up a particular gadget or a threat, the camera carelessly introduces us to that particular thing making the succeeding scene predictable. The film may be a hard morsel to gulp down but it enlightens the mind and awakens the ignored aspect that a domestic discord can be devastating.

Pihu is not meant for faint-hearted people. It dramatizes a horrifying situation that no child should ever be in. It keeps the muscles tight, fists locked, nerves tense and a heartfelt longing to keep the child safe till the end.No one realises or visualises a scenario of an unattended child who can inflict serious injuries to oneself and to others by innocent but perilous mistakes. Any child is intriguing, inquisitive and a very good observer. It tries to imitate everything around including the repetitive tasks that the members of the family perform in their day to day dealings. Pihu does the same thing. She does everything that her mother would do ignorant of the dreary consequences. The observation of the director is sword sharp. He has not missed a single possibility that the child would resist when left all alone.In a scene,Pihu is shown keeping the leftover chapatti in the microwave and the buttons are pressed haphazardly and the chapatti starts burning. The little fingers still keep working on the buttons and the camera revolves along with the roti from inside the microwave providing a glimpse of the hungry helpless child standing outside awaiting serious dangers. The heart just misses a beat!

It is highly difficult to write a script for a toddler, rather it is impossible. A child cannot be forced to perform as a solo actor for a film buthats off to Vinod Kapri for bringing the events to light in the most appealing form, though it is spoiled by few repetitions here and there. The reason for making Pihu an impromptu watch is that the director, crew and the family members stayed in the same apartment till the shoot ended to make the child comfortable and familiar with the crew and the house. The activities were recorded in the camera for sixty hours plus capturing the child in its normal playful mood and then the edited segment of one hour thirty minutes wasprepared for the filming.The background score maintains the already existing tension in the house.

Pihuhas everything to scare the hell out of you. At every step and with each action of the child, the heart is either filled with fear or pity.

The movie needs to be taken seriously as it delivers a huge impactful message. It should be edited, shortened and screened to sensitize parents to make a checklist at home in order to make the home environment harmonious and child-friendly.

Strained marital relationships can be devastating, especially for the child. Once you have kids you need to behave more responsible and mature because it is the child who suffers the most in all the domestic strife. The many nail biting moments the movie gives, with a strong point to ponder upon, makes up for the inconsistent writing and camera positioning.

I go with two and half stars and an extra half star for daring to pick up an unusual topic and executing it well.