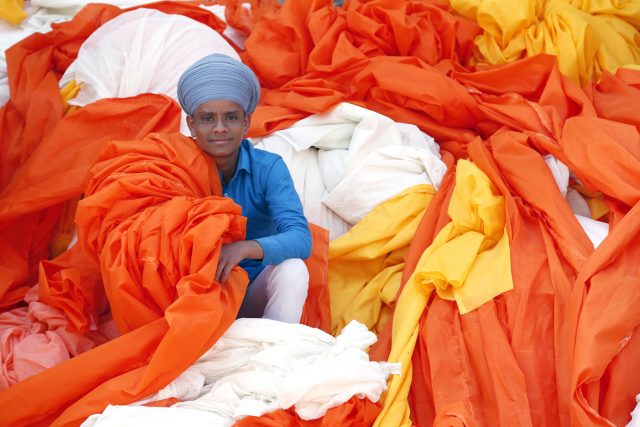 By OUR STAFF REPORTER
DEHRADUN, 24 Mar: The ‘Jhandeji’, which is the symbol of love, harmony, humanity and faith at the Guru Ram Rai Darbar Sahib, will be raised on Monday in the presence of lakhs of devotees. Mahant Devendra Das will begin the process of raising the holy flagpole at 3 p.m., which will continue till 5 p.m. The Shri Darbar Sahib Managing Committee has also made the necessary arrangements for the Jhanda Mela.
‘Gurumantra’ was delivered to the Sangat by Mahant Devendra Dass this evening. Mahant Devendra Dass explained the significance of ‘Guru Mahima’. He said the person following the path described by the Guru attained the blessings of Heaven while being on Earth.
On Sunday evening, the Sangat of the East was distributed ‘Pagri, ‘Tabeez’ and ‘Prasad’. With this, the Sangat of the East was bid farewell.
Manager of the Fair, KC Juyal disclosed that, on Monday, the flag-hoisting programme will be initiated at 8 a.m. The old Jhandeji will be brought down. The devotees will prepare the new Jhandeji by bathing it with milk, yogurt, butter, Gangajal and ‘panchgavya’. From 10 a.m., the ceremony of putting the covers over the new Jhandeji will be initiated. Between 3 and 5 p.m., the flag will finally be raised.
Security arrangements have been made by police. At the fair site, Police have opened a special ‘Mela Thana’. It will have 1 Inspector, 4 Sub-inspectors and around 30-40 other policemen taking care of the security arrangements.
Five fire tenders will also be deployed at the mela. As many as 40 CCTV cameras have also been installed. A team of doctors of Shri Mahant Indiresh Hospital will also be on duty. Four big LED screens have been installed at the fair premises by the Darbar Sahib Management at Darshani Gate, Bhandari Chowk, Saharanpur Chowk and at Darbar Sahib to telecast live the programme at the fair site.