DEHRADUN, 26 May: A woman journalist reportedly from a regional news channel, TV 100, has been accused of duping Bihari workers at a time when they were already facing a financial crisis and had also lost their jobs due to the lockdown.
A case has been registered against Anjana Goyal at the Kotdwar Police Station under sections 406, 420 and 506 of the IPC. According to the FIR by Virendra Kumar, son of Narendra Kumar, who operates a travel agency in Kotdwar, Anjana Goyal had approached the agency and hired a bus to send the stranded Bihari labourers from Kotdwar to Bihar. She urged the agency to give a discount to her because the Bihari workers were poor and she wanted to help them reach their native places. Consequently, an amount of Rs 85,000 was fixed between them as fare of the booked bus to send 30 workers back to Bihar from Kotdwar.
This comes to Rs 2,883 per passenger. However, she allegedly charged an amount of Rs 5,000 from each worker and Rs 1,800 for each child, including newly born babies, despite claiming to be sympathetic towards them.
According to the complainant, he objected to the Bihari workers being charged so much and urged Anjana to return the extra money to them. However, she allegedly threatened Kumar with dire consequences if he created any problem, claiming that she had a lot of influence in the administration because of being a journalist. As per the complaint, three buses were sent to Bihar. Once the buses returned, Kumar along with a social activist Sudhir Bahuguna reached the Police Station and filed a complaint. A memorandum was also submitted to SDM Kotdwar by the complainants in this regard demanding strict action against the journalist. The complainants also claimed to have video footage in support of their allegation. It is being claimed that TV 100 has issued a clarification that she is no longer working for the news channel.
According to the Kotdwar Police, a case has been registered and inquiry has been launched into the complaint. 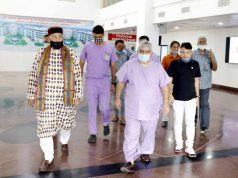