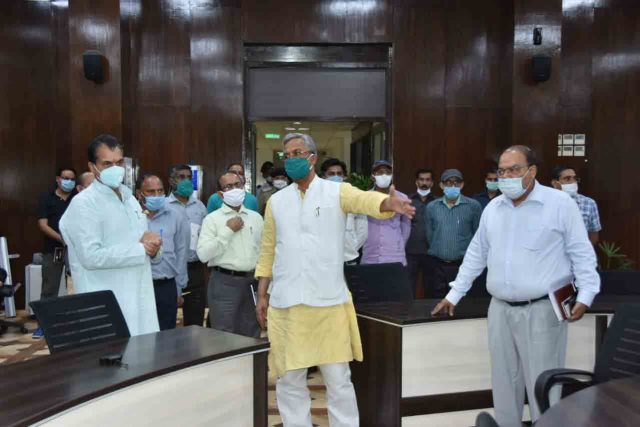 Dehradun, 17 Sep: The State Cabinet today discussed 32 proposals, of which 30 were approved. Among the most important decisions taken today, the cabinet today mulled holding just a one day monsoon session of the state assembly in view of the Corona pandemic. This one day session may be held at the Secretariat according to sources. The proposal to hold just a day-long session was discussed in view of some other states also doing the same. However, a final decision in this respect will be taken tomorrow. Even the Parliament session has been curtailed this time due to the pandemic. It may be recalled that the state assembly hall is very small and in order to ensure social distancing, members will also have to be seated in the visitors’ gallery and the media gallery, which are also relatively small when compared to the state assembly buildings in other states. Even that may not be enough to ensure physical distancing and hence senior members of the House have been urged to participate in the session in online mode.
In a late evening development, today, Chief Minister Trivendra Singh Rawat and Assembly Speaker Prem Chand Aggarwal inspected the Veer Chandra Singh Garhwali Conference Hall at the Secretariat to explore the possibility of holding the session of the Assembly there. A final decision in this respect is still awaited.
Among the other proposals discussed and approved by the Cabinet today included the decision that not only the ministers but also the Speaker and the Deputy Speaker would be required to pay their income tax from their own pockets. A proposal to rename Uttarakhand Technical University after Madho Singh Bhandari was also approved. The cabinet also decided that a bill would be introduced in the House in the coming session to make a provision of fines if people do not wear masks in public places. A proposal was submitted seeking approval to acquire the land of Radha Bhavan in Mussoorie for the state guest house in the hill station, but the cabinet rejected it. The cabinet also approved a proposal to create a post of Director General of the Cultural Directorate in the state and another proposal to raise the salary of junior engineers from Rs 15,000 to Rs 24,000 when hired through outsourcing. The cabinet also approved a proposal to waive House Tax in the case of ex-servicemen below the rank of JCOs or their widows. In another important decision, the Cabinet approved the proposal to implement the amendments effected by the Centre regarding MSMEs in Uttarakhand.
The cabinet also decided to grant three months’ tax exemption in permit renewal of school buses and cargo vehicles in view of the Corona pandemic. It approved a proposal on the grant of land rights in lieu of land acquisition for the Kedarnath redevelopment project.