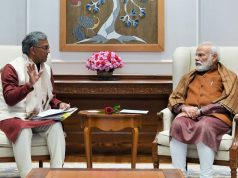 CM calls on PM, urges him to grant funds for Kumbh Mela