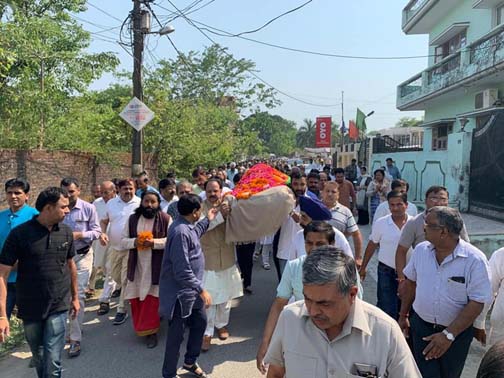 By OUR STAFF REPORTER
Dehradun, 9 Jun: Leader of the Uttarakhand BJP Umesh Agarwal passed away, here, today. He had been ailing for some time. His final rites were performed at the Lakhibagh crematorium here.
Present on the occasion to pay tribute and offer condolences were Chief Minister TS Rawat and many others.
The funeral procession began from Agarwal’s residence in Clement Town. Leaders of major political parties were also present on the occasion, as were representatives of business associations.
The CM offered a wreath to the mortal remains at Agarwal’s residence. He met the family members and offered his condolences. He recalled that Agarwal had served the BJP for many years and was personally known to him for the last 25 years. Agarwal had been president of the City unit of the BJP and was also a leader of the business community.
Also present were BJP MP and State President Ajay Bhatt, Mayor Sunil Uniyal ‘Gama’, MLA Harbans Kapoor, MP Tirath Singh Rawat and many others.