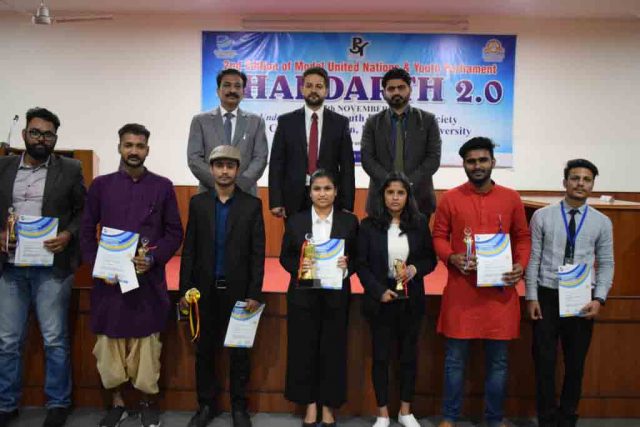 Dehradun, 17 Nov: Law College Dehradun, Uttaranchal University, organised a two-day Intra State Model United Nations (MUN) and Youth Parliament, the ‘Shabdarth 2019’. More than 150 participants from top 10 universities and colleges participated. MLA Munna Singh Chauhanwas the Chief Guest, while Chancellor Jitendra Joshi, Vice Chancellor Prof (Dr) NK Joshi were the guests of honour.
Two committees, the UNHRC and Joint session, were constituted for the competition.
In the ‘United Nations Human Right Council’, various delegates discussed the condition and rights of the LGBT community. Various opinions were voiced by the delegates relating to unequal treatment, domestic violence and the prevailing discriminations in society for women and children in war affected zones. The delegates discussed the problems faced by women and children in refugee camps such as Education, Food, Rape, Health and Sanitation.
In the ‘Joint Session of Parliament’, the issue was formation of Media Regulations relating to Media trials and fake news. The delegate representing PM Narendra Modi asserted that the present government had a serious concern about media trials and ongoing fake news in the current scenario. He also stated that the present bill was the voice of new India. The participant representing Rahul Gandhi stated that it was an attack on the freedom of expression. He did not raise opposition to the passing of the bill controlling media, but wanted it to be implemented with certain amendments.
While addressing the youth, Chief Guest Munna Singh Chauhan stated that human beings were the most exquisite creation of the Almighty and it was vital for a person to maintain individuality as everyone was unique in nature. Legislatures were the representatives of the people and their primary duty was law making. According to him people always talk about fundamental rights but fail to observe fundamental duties.
Also present on the occasion were Principal Dr. Rajesh Bahuguna, Dr Poonam Rawat, Kumar Ashutosh, Dr Anil Dixit, Dr Razit Sharma and a large numbers of students.