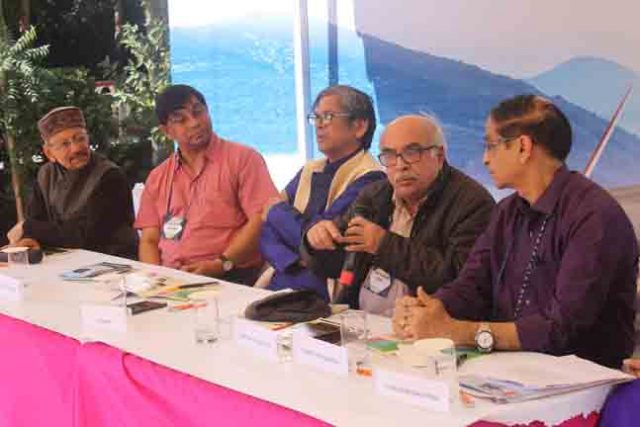 DEHRADUN, 16 Nov: A very interesting session was held on the second day of the Valley of Words, the on-going international literature & arts festival here today where three books written in Hindi were discussed. The books included one by the local writer Jiten Thakur, titled, “Chauraha”. Another book discussed at the session was “Pagalkhana” written by leading satirist and a Padma Shri awardee Gyan Chaturvedi and the last was “Badalta Gaon Badalta Dehat” written by social scientist Satendra Kumar. The session was coordinated by Kumudini Nautiyal while it was chaired by noted poet and media person Dr LS Bajpai. Chaturvedi’s latest publication Pagalkhana is a fantasy woven around the market. The book tries to show how markets are seeking to control the lives of consumers now. Speaking about his book, Chaturvedi admitted that life was not possible without the market but added that he was concerned about the overreach of the market in the lives of the people. He added that while the markets were originally planned and set up for the convenience of the consumers but they had developed now in a way that they were using the people and the consumers for their convenience and prosperity. Markets were no longer restricted to serving or catering to the needs of the people but were now deciding the wants and needs of the people, which was a matter of concern. He added that the people were strangely celebrating this onslaught of the market into their lives. The markets had penetrated into the lives of the people in such a manner that they understood the language of the people, their weaknesses and even instincts better than the peoples themselves. Markets had become the kings instead of the consumer. Social Sciencist Satendra Kumar’s book Badalta Gaon Badalta Dehat dwells with how the people living in the rural areas had changed over past few decades and how the villages had changed themselves. It is one of the relatively fewer books on social science written originally in Hindi. Speaking about the book, Satendra Kumar said that people were changing but not necessarily for better. Speaking in their native tongue but wearing western attire, they remained neither Indian nor could become western, he observed. Kumar also lamented the fact that few books on the social science had been written with real Indian perspective in India and it was tragic that the vernacular students of social science were being taught through notes and course guides rather than through original text books. He also observed that the curriculum of social science in Indian universities was such that western models were applied to Indian data. As a result, those teaching social science and those studying social science in Indian universities were sort of living a dual life where they worshipped and followed religious customs in life but criticised the beliefs in God and the religion in the class. Kumar thanked the organisers of the Valley of Words literature festival for including his book because it was not usual to discuss social science books at the literature festivals in India. The last book discussed in the session was Chauraha, a fiction by leading fiction writer from Dehradun, Jiten Thakur. Speaking about his book, Thakur informed that the book was in respect of few women from different cultural backgrounds who were forced to live together in a village in Jammu region. He hinted that he picked up the characters from the people he actually met in his life. These women, Thakur added, were forced by the circumstances to live a life of pretence. They were penniless and were forced to often pass hungry but pretended before the guests that all was well with their lives. The story is built around these women and their courage in struggling but still giving a meaning to their lives. 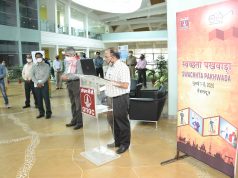