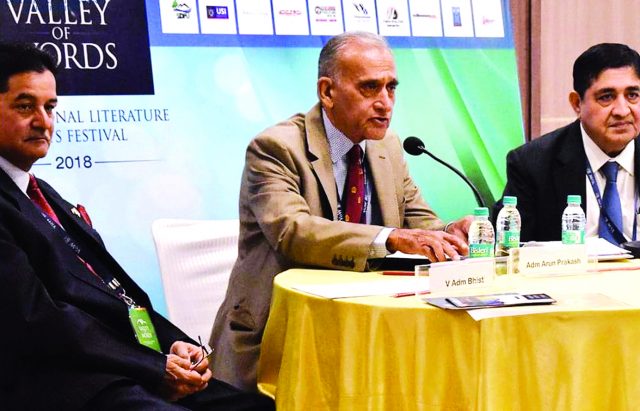 Dehradun, 24 Nov:  The second edition of the Valley of Words Literature and Arts Festival had interesting sessions lined up on the second day today. Some strategic topics were taken up and well discussed and debated by experts. One such session was related to  Pakistan and aptly titled ‘Pakistan: A challenge for itself! And the world.’ The session was chaired by senior bureaucrat and a retired Chief Information Commissioner of India as well as Chairperson of National Commission for Minorities, WajahatHabibullah.  The discussants were TilakDeveshwar, Rajiv Dogra and AshaliVerma.

Pakistan has been one of the most controversial neighbours of India till date, and it would not be an exaggeration to state that our country has had more problems with Pakistan than any of its other neighbours.  It was therefore an eagerly awaited event on the second day. Quite naturally with such a distinguished panel, the level of discussion was very high. It was an interesting discussion on the topic, with people pouring into the hall in large numbers to hear the distinguished speakers.  The discussion touched upon every aspect of Pakistan’s problems which have been a challenge for them, and for the world around them. Habibullah introduced the speakers and gave the audience a brief idea of Pakistan’s current situation in the modern world. AshaliVerma took over from there and explained how Pakistan had been suffering from constant internal challenges such as terrorism, economic crises, and a misguided youth without access to decent education. Tilak spoke further on how rulers in Pakistan had not governed it but instead leveraged it on a global scale. Pakistan had been a centre for various Jehadi organisations which had previously sheltered terrorists like Osama-bin-Laden. Tilak emphasised, “We treat Pakistan as a normal state whereas it is anything but that..”.

Habibullah however contradicted Tilak  and felt that Pakistan’s mindset of hatred towards India was actually the mindset of its military, and how the Pakistan Army wanted to continue war with India irrespective of their loss or win. Habibullah concluded the session with a final note on how there have been changes in the attitudes of senior leadership in Pakistan’s army recently, with the exponents of an aggressive stand more in the clergy than in the army. The audience thoroughly enjoyed the session and put up lots of questions to the speakers, who were more than happy to answer the audience. The speakers also thanked the audience for being patient and listening to them.

Another session of strategic importance was related to India’s Maritime history. Despite being an interesting subject, there is not much general awareness about India’s maritime history and operations. Discussion on this topic was held between Vice Admiral Harish Bisht (Retd) and Admiral Sanjay Singh with Admiral ArunPrakash as the moderator. Admiral ArunPrakash, who himself has served as Navy Chief, started the session by introducing the discussants and briefing the audience about India’s Maritime History. He informed the audience about India’s long sea-faring tradition and its relationships with other countries through reciprocal trade, along with a fascinating insight about the role played by the sea in the decline of the east and rise of the west.

Sanjay Singh talked about India’s Maritime Strategy – how the forces of globalisation were changing the sea landscape, and the changing role of India as a significant naval power. He also discussed the rise of China, and the effect of recent developments in the international political arena like Brexitand the election of Donald Trump, which entrenched further the United States trade war with China. He also spoke about the changing contours of Indian Navy and how India was developing its infrastructure and building up institutions towards the road to becoming a naval superpower.

Following Vice Admiral Bisht, Sanjay Singh briefed the audience about the circumnavigation project taken up by the Indian Navy. In particular, he talked about the Indian Ocean Region and how India’s extensive coastline had enormous economic dividends. He too talked about our coastal security and the various organisations like NCSMCS, HADR and NEO working on modernising the Navy. Further, he informed the audience of the various multilateral and bilateral Navy exercises which had been undertaken in co-operation with the United States.

The many retired army personnel present in the audience put up various questions inquiring about India’s position in the contemporary geo-political scene, and how to tackle the dilemma of a much economically stronger neighbour China. The panellists answered eloquently, and many interesting dialogues emerged from the audience interaction.