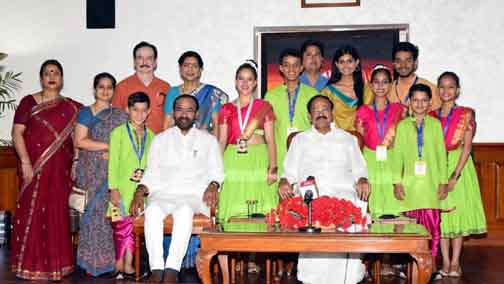 DEHRADUN, 1 Aug: A group of nine, (six young cultural enthusiasts, an Artistic Instructor, a group leader and a volunteer from Nanhi Dunya organisation) represented India at the Brave Kids Festival, Poland. Nanhi Dunya, ‘The International Movement of Children & Their Friends”, was founded in 1946 by Prof Lekh Raj Ulfat. Nanhi Dunya Rangshala is part of Nanhi Dunya Movement. It’s a core activity where children are given opportunities to reveal latent talents. Ashu Satvika Goyal, a social activist and an Artistic Instructor, said that Brave Kids is a Cultural Educational Programme organised under the patronage of UNESCO and Polish Ministry of Culture and Heritage. Brave Kids’ main aim is to unite children from all over the world in an atmosphere of friendship and respect for each other’s culture. They do so by welcoming children from all over the world with artistic experiences aimed to inspire them to imagine a better future for themselves and their communities and provide them with tools to help them realise their aspirations. This year was the 10th edition of the Brave Kids Programme at which they invited a group of six children – Saksham (10), Rahul (10), Anchal (13), Saniya (13), Manish (13) and Khushi (14), artistic instructor Ashu Satvika Goyal, group leader Harshit Gupta and a volunteer Nitin from Nanhi Dunya, to represent Indian Culture at the festival. There were 16 groups from 15 countries, namely India, Palestine, Peru, Poland, Colombia, Iran, Kazakhstan, Slovakia, Syria, Belarus, Kenya, South Korea, Hong Kong, Ukraine, and Nicaragua that participated in the Brave Kids Traditional. The performance, “Tarang”, presented by Nanhi Dunya children consisted of the classical dance Kathak (with bol and dholak), original Sanskrit mantra, west Indian folk dances and songs from the states of Punjab (Bhangra), Gujarat (Garba) Maharashtra (Lavani) and Uttarakhand (Garhwali pastoral mountain folk dance).The performance included props like Bhangra scissors, Gatka and instruments such as Dholak and Lezim. This year, the Brave Kids Grand Finale performance was of 45 minutes which included dances, songs, music, instruments, circus and a theatre act which was performed in Theatre Polski, Wroclaw, Poland. On their return, the Nanhi Dunay performers met Vice President Venkaiah Naidu and MoS, Home, Gangapuram Kishan Reddy. The Vice President Venkaiah Naidu emphasized the importance of teaching India’s heritage, culture, and traditions to children. Observing that participating in events such as the Brave Kids International Festival would enable the youngsters to understand the importance of friendship and respect for each other’s culture, the Vice President expressed the hope that taking part in such events would contribute to a peaceful and sustainable world. A handmade book which consisted of 72 years of history of Nanhi Dunya and Brave Kids was presented by Ashu Satvika Goyal to the Vice-President. A colourful collage of Brave Kids was also presented by Kiran Ulfat Goyal (Chief Promoter of Nanhi Dunya). The group also met Lt Governor of Delhi Anil Baijal and his family at Raj Niwas. Cultural Minister Prahlad Singh also met the children at his residence and witnessed the performance. He presented Mahatma Gandhi’s biography as a life lesson to the group with his blessings. Chief Promoter of Nanhi Dunya Kiran Ulfat Goyal said, “Nanhi Dunya has been committed to working in the field of Women and Child Welfare over the last seventy-two years. It is a movement where children can transform their dreams into reality. These efforts of Nanhi Dunya are reflected through its participation in International cultural festivals.” Other dignitaries present with the group were Vijay Goyal, Shubhi, Yashoda Manral, Rohit Shukla and Amitoj Marwah (Members of Nanhi Dunya).