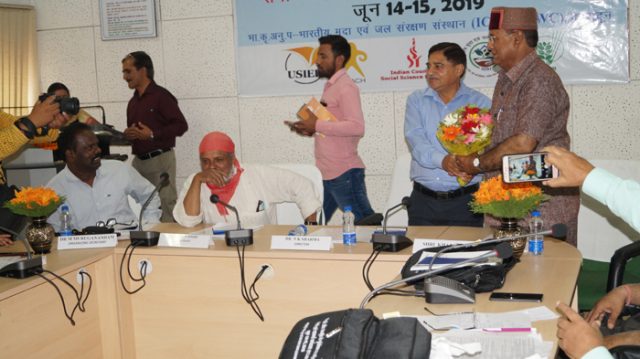 By OUR STAFF REPORTER
Dehradun, 14 Jun: A 2-day National Seminar-Cum-Consultation Workshop on Revisiting Traditions and Culture (RTC-2019) began at ICAR-Indian Institute of Soil and Water Conservation (ICAR-ISCWC), here, today.
Padma Shri awardee Dr Anil P Joshi, Environmentalist, Social Activist, and Chairman, HESCO, was the Chief Guest and MLA Khajan Das was the Special Guest at the inaugural function.
Dr Joshi, in his inaugural address, proposed forming a forum of people, called the CAT (Cultural Advocacy for Tradition), possibly by the organiser and the delegates of the seminar to better comprehend and unify the traditions and culture that benefit the economy, GDP, and help public and resource stakeholders.
Earlier, Khajan Das described the features and importance of the region’s culture, unique in itself. He spoke about the traditions of fishing festivals and cultural ceremonies of the region, which had a deep ethos.
At the outset, while welcoming the Chief Guest and Special Guest and the participants of the seminar, Dr NK Sharma, Director, ICAR-IISWC, described the gist of the seminar.
Dr M Muruganandam, Organising Secretary of the Seminar, introduced the context, themes, objectives and programmes of the seminar that would take place over the two days and welcomed the overwhelming response received from Andhra Pradesh, Bihar, Gujarat, Kerala, Madhya Pradesh, Uttar Pradesh, and Tamil Nadu, besides Uttarakhand and New Delhi, over a short span of time.
In his speech, Dr Joshi lamented that people were moving towards artificial demands, the so-called modern life and inappropriate lifestyle, ignoring the traditions and culture, causing huge environmental and ecological problems of various kinds. Rivers were becoming empty and forests reducing fast, with which the livelihood and food security avenues were being jeopardised. He spoke about the increasing amount of agricultural chemicals being used, raising cancer levels in the country. He said the seminar and workshop were of utmost importance and praised the organisers, ICAR-IISWC, and especially the Organising Secretary Dr Muruganandam, Principal Scientist, who conceived the topic of the seminar out of the USIEF-Fulbright Alumni Award received.
Dr Joshi proposed Dr Muruganandam to be Secretary of the Forum, CAT. Earlier in his speech, he called for change in the educational system and improvement in the learning atmosphere and parent-teacher-student relationships. He advocated going protection of forests and trees, the natural air-purifiers instead of artificial and costly and polluting air purifiers. He emphasised forest management and river management through tradition and culture-based activities. Development with inclusive ecological and environmental interests had to be the motto of resource management and development. The participants had a live interaction with the Chief and Special Guests.
The inauguration and seminar were attended by 100 participants, including professors, scientists, field functionaries, social activists, NGO professionals, and scholars from across India and 25 presentations and were made during today’s deliberations. The programme is jointly sponsored by the United States India Educational Foundation (USIEF), New Delhi, the Indian National Trust for Art and Cultural Heritage (INTACH), New Delhi, and the Indian Council of Social Science Research (ICSSR), New Delhi. A consultation workshop with around 40 village pradhans and key-informants has been planned in the forenoon session besides 3 concurrent sessions, tomorrow.