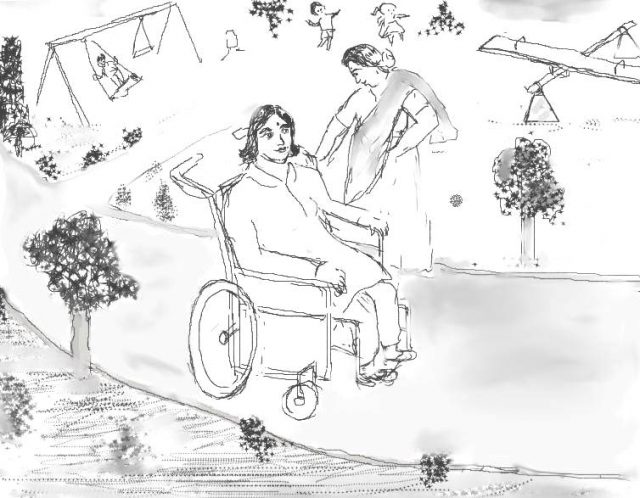 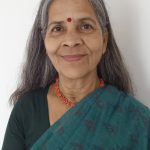 By Savitri Narayanan
The park was deserted except for the three girls near the swings and a few boys riding their bicycles around. Two young mothers sat on the cement bench in the shade, watching their little ones play in the sand-pit.
Arun, with the faltering gait of a three year old, ran towards the swings.

“Arun, not so fast, you’ll fall down!” said Alka from her wheelchair. Aditya hastened after him, “See how fast they swing! You’ll get hurt if it hits you!” the protective elder brother guided Arun to the see-saw.

“So what Aditya’s only six! How protective of his little brother!” joy flooded though Alka’s heart.
Sumitra put the wheelchair in the shade and followed the children. Gently she helped Arun on to the see-saw and stood beside him with a loving, protective look.
The see-saw rose higher as Aditya pushed harder, thrilled to be there. The whole day he had been pestering to go to the park. He loved the outdoors.
“Gently, Aditya,’ Sumitra chided, “Arun is only three years old! If you bounce too high, he might fall off!”

Alka fondly watched her elder sister. There she was guarding Arun on the see-saw and also pushing the swings higher for the girls. They giggled in delight.
In November, when Alka had met with the accident, Sumitra had come down to stay with them in their flat in Hebbal. In Tumkur, she lived in a joint family so when she heard of Alka’s accident, it was easy to pack a bag, hop into an auto and head for the hospital without worrying about her children.
Tears welled up in her eyes. Alka realised she had no handkerchief, so used her dupatta instead,
“What happened? How come you are in this wheelchair?”

In the past few months, Alka had got used to the question. There weren’t many wheelchairs around in the neighbourhood so Alka was surely noticed. Passers-by stopped to chat with her. Some to greet, some in their kindness, some out of curiosity but the wheelchair caught attention.
“Well, it was a road accident. I was on my kinetic, going to the office as usual and then there I was on the road…..” Alka had got used to telling the story so often that it somehow seemed to hurt less and less. “….someone took me to the hospital and here I am – me and my wheelchair!”
The middle-aged woman listened attentively, with no questions.
“Himmat mat haro, beti”, she patted Alka’s knees gently and sat down thoughtfully on the cement bench beside her. The gentleness in her voice touched somewhere and Alka suddenly burst into tears. The tears flowed down in torrents.
Alka recounted the incident and felt much lighter as she concluded, “Think of my children and my husband – how will they manage! And poor Sumitra didi, stuck here because of me! If only I could walk!”
“Where there’s a will, there is a way beti,” she said gently patting Alka’s knees, “For all you know, soon you could be there.” She pointed at Sumitra didi playing hide and seek with Arun.
Alka looked at her, didn’t know what to say.
The woman continued, “There was a time when, like you, I too was on a wheel chair,” she said, “And a catheter, which meant a bag of urine hanging over my shoulder. There was a fracture and some nerve injury, I had no sensation.” Alka listened as she recounted her experience in detail. “I practiced walking with crutches, with walking- sticks and a walker – I HAD to walk!” Inspired by her spirit, Alka kept gazing at her eyes.
“God came to me in the form of that doctor,” she said remembering that afternoon in the doctor’s clinic. “Take this tablet now and these two after two hours. Hopefully you will pass urine soon.”

Alka could visualize the woman escorted by her daughter and the home nurse hopefully waiting for the urine to pass so that the catheter could be junked.
“….and it worked, thank God!” she continued, “Not only that, exercises and physiotherapy helped me back on my feet! Would you like to consult my doctor? He is in Mumbai…….”
“I will do anything, aunty,” said Alka with a surge of excitement, as she noted down the doctor’s contact number. “I want to be there, with my children – in the garden, in their school, back on my kinetic, back in my office!”

As the woman limped away, Alka’s mind was on a flight to Mumbai, to meet the doctor, seeking a miracle. Alka could see it happening, a new life without the wheelchair, back on the kinetic, back to life.
Arun and Aditya came running, Sumitra didi trailing along, “Come on, let’s go!”