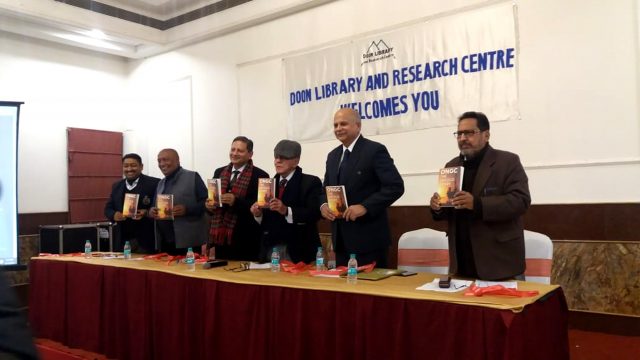 By TANIA SAILI BAKSHI
DEHRADUN, 16 Feb: At an event organized by the Doon Library & Research Center in Dehra Dun, author Raj Kanwar’s latest book ‘ONGC: THE UNTOLD STORY’ was celebrated.
Dr. Sanjeev Chopra, IAS, Director, Lal Bahadur Shashtri National Academy of Administration (LBSNAA), Mussoorie was the Chief Guest. Other prominent guests were DG (Law and Order) Ashok Kumar, Prof Ganesh Saili, Pradeep Singh who laudatorily spoke about Kanwar’s intimate knowledge of ONGC. Dr. BK Joshi, Director of the Doon Library presided. Other author-guests were Aloke Lal, Mona Verma from Haridwar, Nadir Bilimoria, Pooja Marwah and author-journalist Dr. Jaskiran Chopra as also Monica Talukdar, the artist-author.
The highlight of the programme was a Power Point Presentation that meticulously traced the early history of ONGC. It also profiled those early stalwarts and the pioneers who had built ONGC brick-by-brick. It also explained why Dehra Dun was chosen as the headquarters of ONGC. “Who were the first employees and who was the first woman who had joined ONGC at its inception?” The book is laced with many unknown facets about those early days. It also is a pictorial delight with some rare pictures from Kanwar’s personal archive.
Speaking about the book, DG, Kumar stated, “The sketch of those days is at its best. It is a must read both for the ONGC veterans, current employees and general readers.” He complimented Kanwar for telling THE UNTOLD STORY of ONGC in his own characteristic prose.
The chief guest Dr. Chopra said that Raj Kanwar was an historian, “Who had not only witnessed but recorded ONGC’s history in the book.”
Manav, Raj Kanwar’s son, spoke about his father’s journey in the literary world and the various milestones that he passed by in his long life.
The octogenarian author Kanwar spoke with gratitude and reassured the audience that he had already started work on his next book entitled, “DATELINE DEHRA DUN’ that will chronicle the landmarks that have been crossed in making Dehra Dun, the city it is today.