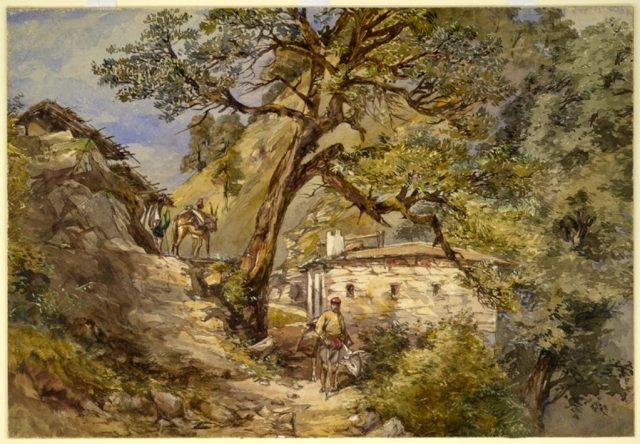 It is the beginning of summer. And the sun in Jharipani is entering the far-from-mellow phase. The sharp climb up from Chuna Khala can leave one parched. Either that or finally, age has begun to find me out. Though there’s little to keep me here, except for the memories of happier days. A little over a hundred years ago, this was where you would quench your thirst at the Half Way House with a small bottle of claret or a cup of coffee or at Mrs Grange’s eatery next door where every item on the menu had character or an individuality and history that was especial to her confections. Perhaps the magic lay in the evenness of the frosting or the symmetry of the pineapple chunks; the wedges atop the chocolate pastry; the crunchy hermit cookies; the candied almonds; the barley sugar and the groovy candies. But the old khansama, who presided over the destinies of the establishment, is long since gone, and the hostelry lies in ruins. On an impulse, I knock on a friend’s door. An artist, she greets me, her hands covered in paint. ‘You don’t mind nah! Ganesh please go to the kitchen and make us two cups of coffee,’ says she, adjusting her colour splattered apron. Everyone knows making a cuppa coffee doesn’t call for genius. But I could not have been more wrong. For I confess that when faced with modern machines, I am as helpless as a woolly mammoth stuck in those primordial swamps and I have the look of a dinosaur after the earth has been hit by a fiery meteor. Understandably, I confront her New Age Talking Coffee Machine with fear. Press the ‘on’ button. It hums, whirs and springs to life, groaning and grinding, running on different wheels bidding me: ‘Welcome!’ How classy! I’m almost tempted to return the compliment and say thank you very much! But it barks back: ‘Empty the Grounds!’ With shaky hands, I remove the soggy grounds. Further instructions are thrown my way: ‘Clean the brewing unit.’ ‘Fill the beans!’ I’m told, followed by: ‘Install the tray!’ By now I’m quivering. But the machine will not let me be. The robotic voice offers me a choice. What would I prefer? Extra strong? Latte? Cappuccino? Or the dark swirling vapours of Expresso? Normal or Extra strong? And then it asks me to hang in there with just one word: ‘Heating!’ As the witches’ brew trickles out, I fill two cups and bolt from the kitchen bathed in sweat. ‘That was easy Ganesh! No?’ my friend asks daubing some more paint on the canvas. ‘No problem!’ I bluff. Come to think of it, making a cup of coffee has not always been a walk in the park. Our early pioneers had no kitchens inside the bungalows because cooking required wood, coal or charcoal and the resultant heat, smoke and smell meant it was better to have it tucked far away from the main house. According to The Illustrated London News of July 17th 1858 that I found in the archives of the Mussoorie Library, the Lady of the House went to the cook-house (the abode of the cook’s family, his children and poultry on-the-loose) to find out why the sahib’s coffee was being delayed. She peered through the haze into the kitchen to discover the cook and his wife straining the liquid through one of the master’s socks’. Imagine, for a moment, the exchange between a European gentleman and his servant over the rather common use of the sock in the delicate operation of straining coffee: ‘Boy, why doesn’t the washer-man wash my socks better? Look at this!’ Says the Sahib holding up a brown red sock. Boy: “Not Washer-man sir, the coffee colour.” Master: “What? You strain the coffee through the sock?’ Boy: “I never take master’s clean sock, after Master wear it, I take it for straining coffee.” Now all of a sudden it’s the master’s turn to feel queasy. It’s similar to the kind of feeling that one has on suddenly hitting the choppy waters at sea. Now that is not everybody’s cup of coffee.

Day 8 of Lockdown: Time is what we want more, but what we use worst – William Penn