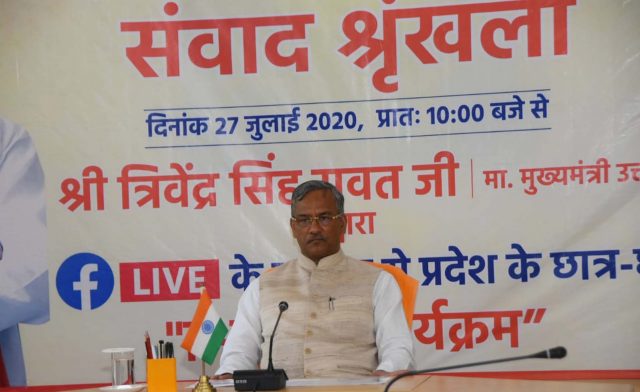 By Our Staff Reporter
Dehradun, 27 Jul: Chief Minister Shri Trivendra Singh Rawat, while addressing students of the state, today, at an ‘e-Samvad’ programme, said that patriotism is the mother of all virtues. No matter in which field one makes a career, the objectives should be patriotic. One has to do something for the country.
Paying tribute to the former President, Dr APJ Abdul Kalam on his death anniversary, the CM recalled that he came to Dehradun to become an officer in the Armed Forces but did not succeed. He was very disappointed and took guidance from a saint in Rishikesh. After this, he tried with full enthusiasm and became a great scientist. After that, he also became the President of India. His life was a matter of inspiration for all.
The CM added that there had been considerable expansion in the field of education in the state. Now, the focus had to be on quality education. In this competitive era, higher educational institutions needed to be adapted to current and future requirements. The SIPET and Drone Research and Development Centre were established as part of this concept. Apart from this, a National Law University would also be set up. The National Institute of Skill Development and a school for talented children would also be opened in the state.
CM Rawat said it was heartening to see that today’s children are very aware of the career opportunities. They know in which field to make a future. Children wished to become doctors, engineers, scientists and civil servants. Some expressed a desire to pursue careers in the fine arts. He added that children needed to move forward with full enthusiasm and working hard. If necessary, the government and society would provide the required support. He mentioned that a youngster from Chamoli district was selected to the London School of Arts. Arrangements were made to send him there. Similarly, a girl from a poor family wanted to go to New Zealand for studies. That was also arranged.