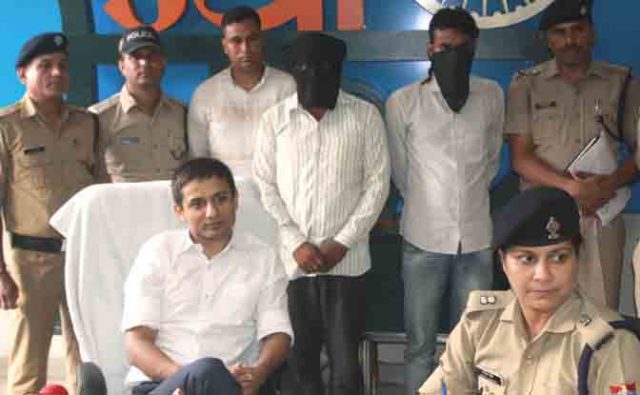 Dehradun, 4 Sep: Police claim to have solved the murder of Kamna Rohilla, a boutique owner. The murder is believed to have been planned by her husband, Kapil alias Ashok, who suspected her of having extra-marital relations. The police today arrested Kapil’s friend from Sardhana, Deepak Sharma, and his younger brother Gaurav, in this connection. Addressing a press conference, today, the SSP also disclosed that the man Kapil had accused of committing Kamna’s murder, Ajay Verma alias ‘Rinku’, had actually been killed in November, last year, and his body thrown in the wilds of Rajasthan. Kapil had paid Rs 2 lakh for the hit. Kapil is under police custody in the hospital, while one suspect is still absconding. Mata Mandir Road resident Kamna had been shot dead in the night of 29 August. Kapil suffered a bullet injury in the abdomen. He had accused Rinku of coming to his house and shooting Kamna, while she was sleeping in bed. Police had launched a hunt for Rinku but had suspicions about Kapil’s narrative. Intensive interrogation of the Rohilla family had provided several leads, which were closely examined. The police also interrogated Kamna’s husband in hospital and it was discovered that he had close relations with Deepak. When the police went to look for him at his house, he was found missing along with his younger brother. It was discovered that the younger brother Gaurav had been in Doon on the day of the murder. In the meanwhile, the two brothers were arrested from Daurala, Meerut, while they were preparing to escape to Rajasthan. They revealed to police that Kapil always doubted Kamana’s character. The couple had borrowed a lot of money from the market, which was to be paid back by Kamna. Lately, she had become close to a financier, Ayush, which Kapil did not like. As part of the conspiracy, with Deepak’s help, Rinku was murdered first and, then, Kamna. The blame was put on Rinku. On 29 August, Gaurav shot Kamna and, then, to make it seem plausible, shot Kapil in the abdomen.