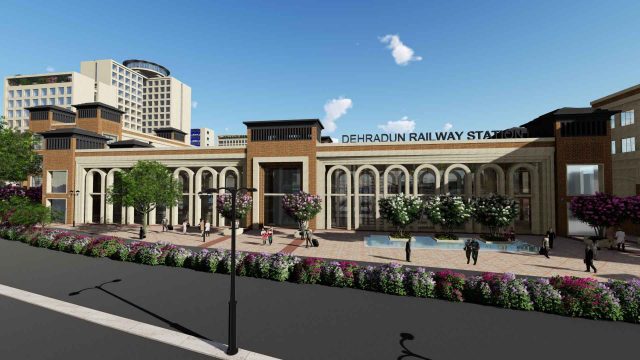 DEHRADUN, 21 May: Amidst the national lockdown due to the ongoing corona pandemic, the Rail Land Development Authority (RLDA) successfully conducted an online pre-bid meeting for the redevelopment of the Dehradun railway station. This RFQ was invited by RLDA during lockdown period on 13 April and the bid submission date for RFQ is 5 July. Over 22 developers including GMR Group, Omaxe Developers, Experion Developers, I Squared Capital, Adani Road Transport Ltd, Mahindra Lifespaces, Pacific Developers, Thoth Infra, etc., participated in the meeting. The meeting was attended by Vice-Chairman, RLDA, Ved Parkash Dudeja, and Vice Chairman, Mussoorie Dehradun Development Authority (MDDA), Ashish Srivastava.
The pre-bid meeting received an overwhelming response from the developers. Various queries of developers were addressed and, for any further query, developers were requested to send emails so that RLDA could reply to them accordingly. Main queries were related to EIA approval, tree cutting permissions, and approval of plans which were explained by the authorities during the conference.
“The Dehradun station will be developed on PPP (Public-Private Partnership) model by leveraging the real state potential of available land surrounding the station. We successfully conducted the online pre-bid meeting for the redevelopment of Dehradun railway station, said Ved Parkash Dudeja.
The total area of land under consideration is about 25 acres, of which about half is allocated for Railway mandatory development such as station building and passenger amenities including offices. The remaining 50 % land will be allocated for real estate development. In the real estate component, 40% built up area will be allocated to the housing project and 60% built-up area will be allocated to commercial components such as Mall, Hotel, retails, multi-level parking and office space. The railway station will be developed under PPP model and its mandatory cost will be Rs 125 Cr.
RLDA has entered into an MOU with Mussoorie Dehradun Development Authority (MDDA) for re-development of Dehradun station, wherein work on master planning, bid processing and construction supervision for this project is assigned to MDDA. During the meeting, VC, MDDA said that MDDA will facilitate approval of all requisite plans expeditiously to kick start the project so that completion of mandatory development of the station in 3 years is achieved. As much as 40% of the estate development of the project will be achieved not later than 8 years.
After, finalisation of eligible developers (bidders) through RFQ, request for proposal (RFP) will be floated by RLDA sometimes in July-2020. Thereafter, concession the agreement will be signed between developers and authority (RLDA) before taking up the physical construction of the Project. This project will not only improve connectivity to the station, better passenger amenities to world class level but also enhance the tourism potential of the city and gel in with the overall master planning of Dehradun smart city among 100 smart cities of country.