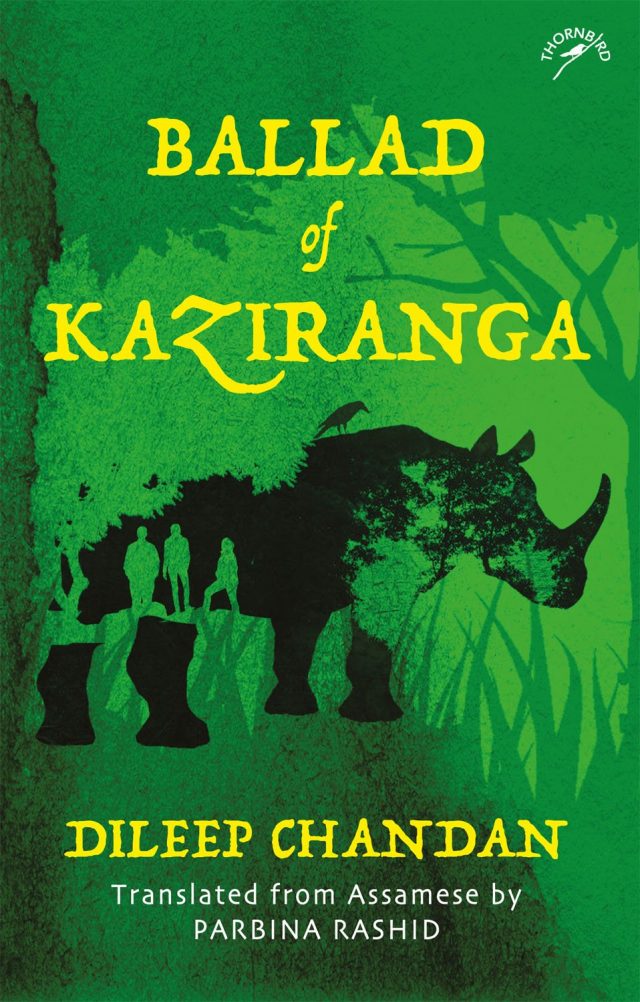 Ballad of Kaziranga’ by Dileep Chandan and translated by
Parbina Rashid is the account of a group of people from different fields of life who recount their personal lives of living in Assam.
First is the story of Hridayananda Saikia, a forest officer who is married to the forest and protects it with his life. His life alternates between the treacherous rides deep into the forest to capture poachers, and enjoying paan and chai with his friends. It is also the story of Amal, who diverts all his focus and time on a new project, hoping to give new meaning to his life, and Rishi who delves deep into the beauty of Kaziranga, his friend, his muse, to get away from a traumatic past. Additionally, it is the story of Amal da, who is lonely and short-tempered and wants to open a resort in the forest to help the economic growth in Kaziranga and find meaning in his own life that has been spent largely separated from his wife and children. And, finally, in snatches, it is also the story of Amal da’s cousin, Arunabh, who works for a South Indian bi-monthly magazine as a correspondent for the North East.
The style of writing is plain and not intricately worked upon in terms of language. However, it is not to say that the book is of poor literary quality. Rather, it is this peculiarity which speaks volumes about its purpose and context.
The author was a senior journalist in Assam for thirty years and won several accolades for his work. Perhaps it was his conversance with the journalistic style which influenced the style of writing in The Ballad of Kaziranga. Chandan’s life as a reporter in Assam has been a source of facts and fresh accounts about Kaziranga in the book, some of which would be unknown to the lay reader: scenes of the burning of effigies of forest department officials by the locals upon the discovery of a hunted rhino; the meagre pay the forest department officials are given; and Malaria, which is otherwise a preventable ailment in the rest of the country, that has cast its morbid shadows upon the locals. Insights like these abound in the book because of the journalistic eye of the author.
The minimalist use of dialogues and the descriptive telling of the tale is yet another aspect which makes the book different from a novel. One may find the uses of clichéd phrases and proverbs an embarrassing inadequacy on the author’s part until the reader becomes aware of the nature of the text. Its existence as a translated work has not lost its essence and the reader is reminded of the same, sometimes to peculiar effect. Nevertheless, it is a conscious decision on the translator’s part to situate the book in an unsettling fashion. The reader is not conceded the comfort of reading a novel written in English; it engages the reader to take active participation in reading and subsequently translating him/herself into the book and experiencing Kaziranga first-hand. The journalistic background of the author augments this effect.
Though written simplistically with conscious discouragement of linguistic ornamentation to preserve the autochthonous narrative, that is to say, though the book can be read in one sitting, it demands time to let its effect and ideas sink in. It demands the reader ruminate and contemplate its narrative long after it has been told (or read) and to that effect it is veritably a ballad. But not solely because of its effect is it a ballad. A Ballad deals with a romantic subject in a sentimental fashion. Ballad of Kaziranga similarly deals with a romantic subject. However, it is not a ballad of the romance between its characters; it is not an erotic romance that the book portrays. It is the romance between the people and the place. It is a romance between its characters and Kaziranga. It is the Ballad of Kaziranga.