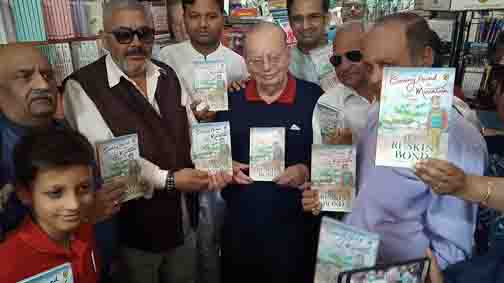 By Sunil Sonker
Mussoorie, 19 May: Famous author Ruskin Bond celebrated his 82nd birthday by releasing a new memoir set against the backdrop of the Partition. The book, titled “Coming Round the Mountain”, was released here at a programme organised at the Cambridge Bookstore, where he signed books for his fans.
This is the first time Ruskin Bond has penned his experiences during Independence. “Coming Round the Mountain” is the third installment of Bond’s award-winning memoir series for children that includes “Looking for the Rainbow” and “Till the Clouds Roll By”. The cake cutting ceremony was held at Cambridge Book Store in the presence of hundreds of fans present from various parts of the county to celebrate the birthday of Ruskin Bond. Children and fans from Delhi, Mumbai and the South, who had arrived specially for the occasion, wished him on his 85th birthday. They prayed for his long life and urged Ruskin to write more books for them. Bond cut the cake specially prepared on the occasion and shared it with his fans. He also signed autographs on the books written by him. Ruskin Bond said his message to his fans, especially children, was to remain happy, playful and keep reading.
In an interaction with Garhwal Post, he said that birthdays should be celebrated everyday by everyone as it created happiness. He said that in ‘Coming Round the Mountain’, he had dwelt on his schooldays, in particular one memorable year, 1947, during which a lot of things happened to him and around him. The making of friends; the loss of friends; the country’s freedom and its division; changes everywhere… But there was one constant – his love of books, and an inclination for putting things down on paper – and it was this that which gave him the confidence and self-belief to take on the uncertainties of living in a changing world.
“‘Be true to yourself’,” my father always told me, “and if you are true to yourself, you will be true to others.” He said the children’s future was bright, but for that they had to work hard. He further stated that the nation was poised to grow and win fame all over the world. Ruskin Bond was confident that the parliamentary election would end with a stable government.
Ruskin Bond is one of India’s most beloved writers, and acclaimed children’s author. He has more than 150 novels to his credit, and has won multiple awards, including the Sahitya Akademi Award for English writing in India, the Padma Shri and the Padma Bhushan. He has spent most of his life in the hills, and that perhaps explains why his novels and short stories have a vivid description of the hillside. When he was in London, he began work on his first ever novel called the ‘The Room on the Roof’, the semi-autobiographical story of the orphaned Anglo-Indian boy Rusty. It won the 1957 John Llewellyn Rhys Prize, awarded to a British Commonwealth writer under 30. He has written as many as 23 novels and as many as 42 collections or anthologies, which include some of his famous works. The writer is reported to have produced much more than that. Ruskin Bond started writing at an early age. Reports suggest that he wrote his first short story when he was 16 years old. It was called the ‘Untouchable’.