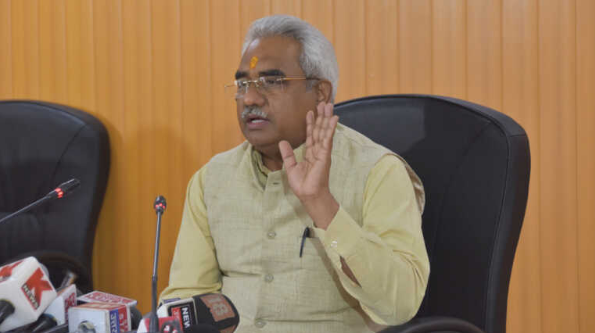 Dehradun, 14 Oct: After obtaining feedback from all the districts, the government decided today that schools would be opened in Uttarakhand in a phased manner from 1 November. The proposal was approved during a cabinet meeting held at the Secretariat, today, under the chairmanship of Chief Minister Trivendra Singh Rawat.
However, according to the cabinet decision, only classes 10 and 12 would be held in schools during the first phase. Government spokesman and senior Cabinet Minister Madan Kaushik stated that this decision was taken based on the feedback from all concerned, including the parents of the students and the schools. It is worth noting that the government had already announced thirty percent reduction of the syllabus in classes 10 and 12 of the state’s Secondary Education Council.
The Cabinet also decided that the decision on other classes would be taken later in accordance with the situation. At present, other classes would continue to be held in online mode. It was also decided that schools would be thoroughly sanitised before opening and then periodically sanitised. It is worth mentioning that schools have been closed for a long time due to the Corona pandemic. Guidelines regarding opening of schools would be issued separately along with the SOPs by the Department of School Education to prevent spread of Corona infection in the schools. Schools would also be directed to strictly adhere to the Covid-19 guidelines which would be issued soon.
At the Cabinet meeting, today, 18 proposals were presented before the Cabinet. A total of 17 were approved. It was decided to form a committee under the chairmanship of the Chief Secretary in respect of the one proposal not approved. The cabinet also approved the implementation of the track and trace system in the Excise Department. Discussion was also held by the cabinet on grants to the government aided colleges. It was decided to constitute a committee headed by the Chief Secretary to discuss and take an in-principle decision, which would be presented before the cabinet once again.
In another important move, the cabinet also decided that more attention would be paid to promotion of sports in the state. The state government would try to spend one percent of the state’s total GDP towards promotion of sports. It was also decided to encourage more private sector participation in sports. Special efforts would be made for the recruitment of excellently performing players in the state service. It was further decided to set up a Mukhyamantri Khel Unnayan Scholarship scheme and Chief Minister’s Sports Promotion Fund. It was also decided that the players of the state would be provided financial assistance to participate in national and international sports competitions. Along with this, the Devbhoomi Khel Ratna Award was also approved for the players based on their performance.
Some of the other cabinet decision included Amendment of the Himalayan Garhwal University 2016 Act and renaming the university as the Atal Bihari Vajpayee Himalayan Garhwal University; introduction of a track and trace system for sale of liquor by the Excise Department; Amendment in service manual of Industries Department; Amendment in Uttarakhand Police Armorer Rules 2020; Amendment in Uttarakhand Civil Defence Selection Rules. It was decided to discontinue one day salary cut every month in respect of the government employees with effect from 1 October, except for the salaries of the Chief Minister, Ministers, MLAs and IAS, PCS, IFS officers. These would continue to be cut in view of the Covid-19 pandemic. Some other decisions included approval of rules made for proper utilisation and management of students’ funds in government colleges. It was decided to increase the purchase price of Pine needles under the Pirul policy from Re 1 per kg to Rs 2 per kg from the pine needle collectors; it was decided not to regularise category 3 land holdings or give ownership rights to those in possession of category 3 land. It may be recalled that holdings of category 4 land have already been regularised in the year 2016. It was decided that those in possession of category 4 land before 1983 would have to pay only 5 percent of the circle rate in 2004 as duty to get ownership rights and towards regularisation. Catogory 3 land is mostly the land with existing or past water bodies or those areas which are submerged during rains.