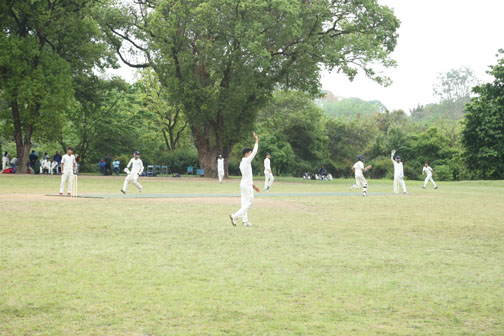 By OUR STAFF REPORTER
Dehradun, 22 Apr: In the Col Shashi Memorial Cricket Tournament for Under-14, affiliated to the ‘Schools’ Cricket Federation of India’, the first match today was played between The Doon School (DS) and Cambrian Hall (CH). CH won the toss and opted to bowl first. Viraj and Tamish opened the innings for DS and right from the first ball both the batsmen started hammering it to every corner. Both remained unbeaten with a record score of 220 runs in their allotted 20 overs. It was a poor show by the bowlers and the fielders. Tamish made 144 in 72 balls, hitting 28 boundaries, which was the first century this year, while Viraj contributed 59 in 48 balls, hitting 8 boundaries to the fence.
Chasing a massive score, CH lost their first wicket at four but later Vatsal and Rishabh gave tough competition, adding 107 for the 2nd wicket in 12 overs, when Rishabh was bowled by Guru for 41 after hitting 5 boundaries. A little later, Vatsal was also bowled by Guru for 59, hitting 8 fours and a six in the 39 balls that he faced. After his departure, it was more of a formality for the rest of the match. Sarthak made 7, Danish, 8, Himanshu, 6 and Tanmay, 5. Finally, CH batsmen made 145 for the loss of 6 wickets in their allotted 20 overs.  Guru and Tamish of Doon School took 3 and 2 wickets, respectively, for 19 and 23 runs. DS won the match by 75 runs.
The 2nd Match was played between Pestle Weed College (PWC) and Sant Kabir School (SKA). PWC won the toss and opted to bat first. Abhishah and Sumit opened the innings for PWC. Abhishah couldn’t contribute much and was caught for his individual score of 4 by Sagar. Sumit did stand like a rock, facing 50 balls for 18 runs. Montazir made 11, Shubham, 8, Samsheer, 11, but the main contribution came from SKA bowlers, who gave 38 extra runs. Finally, PWC made 95 for 6 in their allotted 20 overs. Sagar of SKA took 3 wickets for 24 runs, while Rakshit, Ujjwal and Suhas took one wicket, each.
Chasing the modest score of 96 runs, SKA batsmen were never in a problem. Pranshul and Shiven opened the innings, but Shiven couldn’t do much and was out for five to the bowling of Arsh. Pranshul was joined by Akshit, who looked to be in hurry. They were unbeaten till SKA met the target in 11.2 overs for the loss of one wicket. Pranshul made 17, while Akshit made 50 in 33 balls and hit 11 fours. Arsh was the only bowler to get a wicket.