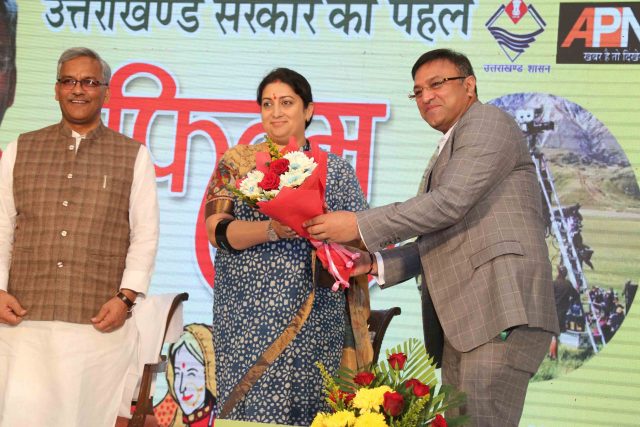 DEHRADUN, 8 Nov: Union Minister, Women & Child Development, Smriti Irani said today that the power of digital medium was growing rapidly and it was necessary to understand it. She was addressing the Film Conclave held in Mussoorie today which was hosted jointly by the state government and APN News Channel as part of the State Formation Week. She also suggested that a content creation working group ought to be set up in the state. Irani, while placing the highest emphasis on content creation, said that it was changing in the world very rapidly and for this the system also ought to be more progressive. She recommended that a robust system be set up to harness the increasing power of the digital medium. Local languages ought to be preferred in content creation, she added. The Union Minister said that multidimensional platforms had to be understood in content creation. Along with film and television, preparations for the digital revolution needed to be strengthened. Digital media would become the most powerful medium in the coming times, she asserted. Irani also said that the history and culture of Uttarakhand ought to be archived and digitised, as it was very rich. 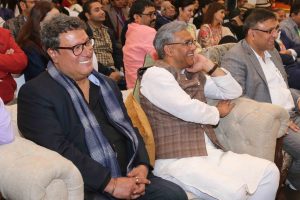 There was a need to introduce it to the whole world. For this, by recording and digitising the history and culture of the state, it would be able to reach out to the whole world through digital media. Chief Minister Trivendra Singh Rawat said the government would implement the suggestions of filmmakers and experts in this field to promote the shooting of films, TV serials, etc., in the state. The Film Policy of the state was formulated incorporating whatever suggestions were received during the Investors’ Summit last year. Positive results had also been seen. A large number of films and TV serials had been shot here, he claimed, adding that many famous film personalities from South India had also come here to shoot their films. The CM claimed that there was a favourable environment for film shooting in the state. He said that Uttarakhand had the gift of beauty from nature. The locations in the state were very unique and not present elsewhere. He claimed that the state had implemented an effective single window system from where all types of clearance were given in an average of 3-4 days. Filmmakers who had shot here also appreciated that there was no disturbance by the local people while shooting in Uttarakhand. Four sessions were held at the conclave discussing the film policy of Uttarakhand and the promotion of film shooting in the state, as well as feedback was taken from filmmakers who had shot in the state. The Film Conclave held in Mussoorie was attended by eminent personalities associated with the film industry.Film makers Vishal Bharadwaj, Tigmanshu Dhulia, Muzaffar Ali, Jackie Bhagnani, Shree Narayan Singh, Ajay Arora, Taran Adarsh, Komal Nahta, Umesh Shukla, Raju Chadha, Rahul Mittra, Girish Malik, Bunty Walia, Abhishek Dogra, Sandip S Singh, Dharmindra Mehra, Vikram Khakhar, Kavita Chaudhary, Bharatbala, Ratna Sinha, actresses Pooja Bisht, Renee Dhyani were among those present on the occasion.