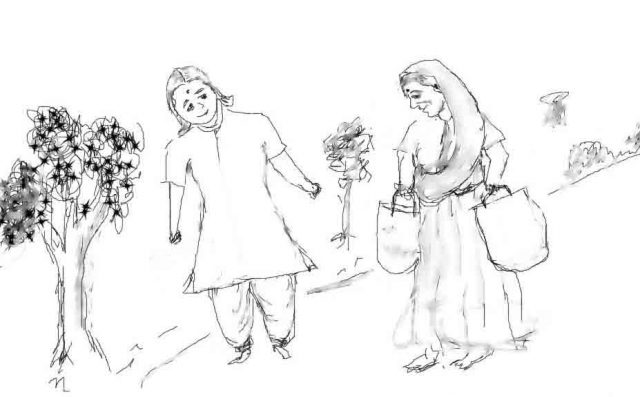 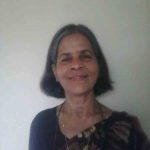 By Savitri Narayanan
“OK bhabhi, take care,” said Simran bowing down to touch her feet, “Especially near the crossing, the way these youngsters speed their bikes…”

“Everyone is in a hurry,” agreed Sheila, “except people like us. Cook the meals, wash the clothes, tend the garden – nothing to rush about!”

“Give our regards to bhaisab,” said Simran as she closed the gate.

“Come over for lunch one day, will make Surjit’s favourite palak paneer,” Sheila smiled and set off. “Oh! It’s half past one, must go now!” she tucked in the sari pallu and lifted the bags.

They were friends and neighbours for years – ever since Simran came to Bhimgaon as Surjit’s bride many years ago. Surjit was the adventurous son who had migrated to Delhi seeking new pastures, whereas his brothers stayed back farming their land. After every harvest, a pick-up van with bags of rice and wheat reached Surjit’s home. His brothers visited once in a while when they would come over. “He is our boy,” Surjit’s elder brother said often, “When he has had enough of this city he will come back home”. There was a fondness in his voice and somehow Sheila felt she too shared the same affection for Surjit.

That was why this morning when they were short of foodgrains, Sheila had walked down there.

That morning, after breakfast, Alok had got up to wash his hands.

“Get from the shop, na?” he said with a trace of impatience, picking up his packed lunchbox, “I am going to my office, not the provision shop!”

“How to ask them again?” she said, ignoring his sarcasm, “Haven’t paid the last two months’ bills…”

“I haven’t been paid either,” he said, “For three months! Will pay him when I get paid!” He banged the door shut and went to work.

“I wish I could help!” thought Sheila, who was boiling milk in the kitchen. More than a decade ago, when her husband passed away, Sheila had become a question mark, a liability. Who wants a middle-aged childless widow? Which of the three brothers’ families would welcome her to stay with them? Go back to her brother in Garwal?

“Sheila bhabhi is not going anywhere,” Alok had stood his ground, “She stays with us.”

“She is family, this is home,” Seema had supported, “Of course she stays with us.”

Sheila was watching them struggle to make both ends meet. She racked her brain to figure out a way to help but couldn’t think of one until this morning!

After the morning chores, when Seema opened the fridge to take out the vegetables, Sheila said, “While you cook, let me walk down to Simran’s; haven’t met her for so long!”

As they sipped tea, Sheila confided in Simran, who was very understanding.

“Bhabhiji, you know this comes from our farms, what’s ours is yours too. Take what you need,” she said, then added kindly, “These hard times will surely pass.”

Sheila crossed the temple gate and turned left at the tea shop. Home was growing closer but the bags seemed to grow heavier.

“Can’t be more than four or five kilos each! How often have I carried the whole month’s provision home myself!” she told herself as she moved along with a bag of wheat in her left hand and another of rice in the other.

Someone was behind her.
“Aunty, how come you are out in this heat?” asked the young man holding his umbrella to shade her too.

“Arun, where are you off to? College?”
“No college, aunty,” he said taking both the heavy bags from her in exchange for his umbrella, “You must come out only in the evenings, aunty! The sun is too hot!”

Seema was waiting at the gate. Arun handed over the bags to her and took leave.

“From their farm in Punjab,” Sheila answered the question in Seema’s eyes, “Put it in before devarji walks in.”

Seema bowed down to touch Sheila’s feet and led her in. The lunch was waiting.