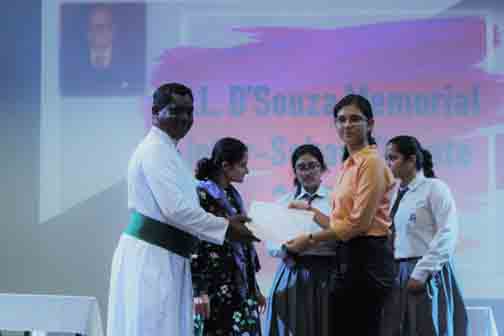 Dehradun, 25 Aug: St Joseph’s Academy held its annual JL D’Souza Memorial Inter School English Debate Competition on Saturday. Highly talented debaters from nine schools – Convent of Jesus and Mary, The Asian School, The Doon School, St. Mary’s – Meerut, Grace Academy, Wynberg-Allen School, St George’s College – Mussoorie, Cambrian Hall and St Joseph’s Academy – participated to prove their wit and eloquence. The nine teams were divided into two pools that contested in the preliminary round.
After a brainstorming exchange of words, four teams, namely St George’s College, St Mary’s Academy, Convent of Jesus and Mary, and St Joseph’s Academy, qualified for round two of the debate.
Round two started at 11.30 a.m. in the school Auditorium with Anugraha Samuel leading everyone into prayer. The ceremonial lamp was lit by the Chief Guest, Dr SC Biala, Principal, Cambrian Hall and the judges for the day, Chitra Gupta, Tripti Chopra and Michael Burrows.
The topics for the final round, based on the Cambridge format, were: “This House believes that modern cinema has a negative influence on the present generation”, and “This House believes that desertification is the biggest threat to life”.
The speakers enlightened the audience with many known and unknown facts to support their ideas. At the end, Chief Guest Dr SC Biala addressed the gathering, complimenting each one of the speakers and encouraging the youngsters to be more confident and hard working to prosper in life.
Thereafter, Principal Bro Jeyaseelan congratulated all the teams for exhibiting their verbal skills and wished them all the very best for all their future endeavours.
The much awaited results were: Round 1 –
Best Speaker for the Motion – Kashish Jaffery, Convent of Jesus and Mary; and Sanskriti Sodai, St Mary’s Academy. Best Speaker against the motion: Arushi Bhatt, Convent of Jesus and Mary, and Saloni Uttam, St Mary’s Academy. Best Rebuttal:
Arushi Bhatt, Kashish Jaffery from CJM, and Sanskriti Sodai from St Mary’s Academy.
In Round 2, the Best Speakers were Arushi Bhatt from CJM and Yash Goyal of SJA. The 1st Runner Up Speakers were Saloni Uttam from St Mary’s Academy and Rachit Taparia from St George’s College. The 2nd Runner Up Speaker was Payal Mehrotra from St. Joseph’s Academy.
St George’s College was declared the Best Team, while Convent of Jesus and Mary came second.
Sonia Bhatt proposed the vote of thanks.