Home Forum Stop Smoking to Save Self & Society
SHARE
Facebook
Twitter
By Pritam Singh
India is the second largest tobacco producer (~800 m
kg/year). WHO studies show that tobacco addiction in India takes away over one million valuable lives in a year. The alarming figures of tobacco addiction in one or the other way represents 34.6% adults (out of which 47.9% are males and 20.3%, females) becoming the fourth largest leading cause of non-communicable diseases (NCD) such as cancer and heart diseases, which account for 53 per cent of all deaths in India. Smoking cessation by the more vulnerable age-bracket remains uncommon as only about 5% of men aged 45-59 years are ex-smokers.
Tobacco smoke, in fact, contains thousands of chemicals, including at least 70 that are attributable to cancer. Only little substances are added for flavour to make smoking more pleasant and allow inhalation of most detrimental products such as nicotine (most additive drug), hydrogencyanide, formaldehyde, lead, arsenic, benzene (main cause of leukemia), CO, PAHs, etc., playing havoc on reducing the Total Lung Capacity (TLC). Lung capacity refers to the maximum amount of air that lungs can hold. A study published in the Journal ‘Chest’ concluded that the lung capacity is a long-term predictor of respiratory mortality. The World Health Organisation revealed that almost all cases of COPD (Chronic Obstructive Pulmonary Diseases) are caused by tobacco – the leading cause of premature deaths.
Our lung capacity naturally declines with age, starting at 30 and with the growing age of 50, the lung capacity may be reduced by as much as 50 percent. This means that as a person gets older, the harder it is for lungs to breathe-in and hold air. The smoking habit and consuming tobacco products aggravate the situation. Smoking means less oxygen supply to our body organs, forcing our heart to work harder to pump oxygen throughout the body. The heart’s working becomes overburdened leading to development of CVDs. Early symptoms of reduced lung capacity include shortness of breath, decreased stamina and reduced endurance and frequent respiratory infections.
The studies say smoking counts for about 85% lung cancer cases diagnosed very late. This is not all – passive smoking which can be defined as impact of individual’s addiction on society – someone living in such an atmosphere or working with – will have substantially increased health risks.
The expensive habit also entails cost of healthcare due to smoking related health problems. On this front, the changes in lifestyle can stave-off health problems related to lungs’ malfunctioning and cardio vascular diseases.However,an intensive study says that ‘will-power’ of opting-out this habit and enthusiastic comfortable “healthy-life”, both, go hand in hand, and this can be evaluated by the chronology of time-scale and its advantage. It says –
– Within 24 hours in addict of heavy smoking leaving the habit, the body realises and the reactive contraction of blood vessels starts resulting in lowering blood pressure and pulse rate initialise towards normalisation.
– Within 72 hours, the taste and smell receptors will start to heal, shifting from abnormality to around normal.
– Within two weeks: After 72 hours, your peak withdrawal symptoms will start to decrease – the breathing system will start to improve. Within 3 months: The lung functions will improve – by six weeks the COPD patients feel more improvements towards mild COPD from chronic i.e. more coughing which means the lungs are now getting more stronger and paving the way to heal themselves.
– Here the lust for such intoxicants gets diminished and by the year end, the COPD will be more improved and lead to weight gain towards cancer-free risk. 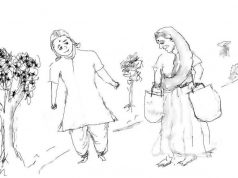 Some wheat and some rice

Science and the Dairy Dilemma